Natty was blessed to have the most amazing, loving, caring, thoughtful key worker when she attended pre-school

Everyone who worked there was wonderful, but the particluar angel who believed so fervently in Natty's potential, the one who spent hours of her own time making flashcards and other teaching materials and attending SALT sessions and learning Makaton and recording every little success in beautifully made learning journals, and listening to my worries and hopes and fears and tears and frustrations, was H.
(They actually call her H, which is odd, because that's what my husband calls me too. But Natty always called her Boff Lady for a reason none of us can ever fathom.)
----------

"I have to say that initially I was very apprehensive about having a child with Down’s Syndrome join our setting. In my ignorance I wondered how we would cope with all her wants and needs in our village hall setting, where the only specialised equipment is an adult’s disabled toilet!

However we had a good transition from Portage workers, and Natty then began her 2 ½ years with us. I was lucky enough to be her key worker for 18 months.

Natty settled in extremely well and enjoyed all the busyness the session had to offer, joining in the activities with confidence and spending time with other children. She also accepted, and most of the time adhered to, the rules and routine of the setting, just like any other child would.

Various activities and the general set up were adapted so Natty had equal access to everything. I remember she was so small when she started, she couldn’t even reach the sand/water tray!

We found Natty to have bags of character, determination, stubbornness, a great sense of humour and she certainly knew her own mind!!!
I have just so many memories of Natty’s time with us.

One of my favourites was when Natty brought the whole, very busy, pre-school to a complete standstill. We had a karaoke machine set up in the top corner of the room which was proving to be very popular! Six or seven children, Natty included, were sitting together watching and waiting patiently to ‘take to the mic!’

Eventually it was Natty’s turn and she chose ‘Let’s Go Fly A Kite’ from Mary Poppins, her favourite film at the time. The first chorus was just a warm up, giving Natty time to get used to the microphone and suss out her audience (who she felt weren’t paying her nearly enough attention) so by the time Natty got to the second chorus, we heard a terrific, ‘WHOA, WHOA, WHOA, LESS GO (dun dun dun dun dun)... FIYA KIIIIE …….' [sic]  booming around the hall!

That was when everyone, children included, immediately stopped what they were doing and just watched Natty perform, right until the very end of her song. Half a dozen bows then followed. Natty was clearly very happy with her performance.

The children then resumed their activities leaving the adults, including a Speech and Language Therapist who was visiting at the time, completely speechless and teary-eyed! It was so emotional to see her up there, so full of confidence and determination. Natty had proved herself.

I found Natty to be a very eager and enthusiastic learner, wanting to be challenged and stretched. At times I found Natty’s eye-contact to be extremely intense. She would hang off your every move or word, eager and ready for the next cue, like a little lion cub, ready to pounce on her prey! There were obviously times when Natty was not in the mood, not receptive, or ‘having none of it’ which can happen with any child. Activities would then be postponed or adapted. 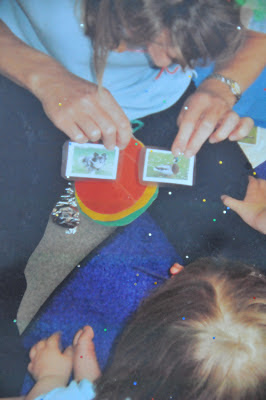 Funnily enough, a lot of our real quality 1:1 time was spent with Natty on the potty, killing two birds with one stone you could say!! I had a captive audience and Natty had the 1:1 on which she thrived. We did everything from matching pictures (‘same, same’) in the early days, to learning phonic sounds and pictures. (ai, ai was her favorite – with the hand salute!)
So much was learnt in those most memorable sessions – and it certainly wasn’t just Natty!

We have always been taught to praise and reward children’s efforts and achievements. Some loved to get stickers or choose a toy for themselves. Natty’s reward? She liked nothing more than some quality 1:1. A playful tickling session, or singing one of her favourite songs. ‘Five Cheeky Monkeys’ springs to mind and we would sing and giggle together with very exaggerated facial expressions!!

I believed in her.
I believed in her potential - she had shown it to me on so many occasions.
I worked on it, built it, and she responded – willingly and with great results.
To use that age old cliché, ‘You only get out what you put in,’ and working with Natty is a perfect example of that.

I still keep in contact with Natty and her family, and I am amazed by her progress. Her reading, her language and writing her name have all astounded me, yet Natty seems to take it all in her stride.

There is still so much for Natty to learn, but with the support from family, friends, school and a changing society, she is the kite, and the sky is the limit.


You might also enjoy reading:
Learning Activities to Try at Home or
Living Life to the Full