Hayley: Approximately 6 and 3/4 years ago, a few months after Natty had entered our world and I had chucked the hideously outdated Handbook for Down's Syndrome that someone gave me in the bin (my daughter is not a kitchen appliance after all) and ploughed through all the useful yet somehow impersonal charity information leaflets, and sat and cried at the hurtfully worded untruths one can find so easily online, I stumbled on Andrew Merriman's book A minor Adjustment after a late night Google search of the term Down's syndrome.

I can honestly say that this book changed my thinking for good. I read and cried and laughed and saw a family like ours. Here was a father not afraid to describe his feelings honestly whether of pride or worry or his inability to choose a winter coat for his daughter. Suddenly I was not alone in my fussing over what Natty would wear.

Andrew never sugar coats life as I don't believe we should, there are challenges and why pretend there are not, but he is capable of great humour in his writing. More importantly he accepts and escribes his daughter Sarah for who she is and Down's syndrome is an important part of that.

I'm in danger of waffling now, but I have to admit I was a little star struck when Andrew and I chatted on Twitter. I am most honoured beyond belief that he has agreed to write a guest post for Downs Side Up for I can truthfully say, that when I began the blog, it was his brand of tell-it-like-it-is support that I wanted to create, to emulate the style of his book in a daily online magazine kind of way. He has been an inspiration.

For that, and more importantly for helping me bond with Natalia all those years ago,and to see the way ahead of us with more clarity, I thank you from the bottom of my heart.

It’s nearly twenty-two years since my dearest daughter Sarah was born with a dramatic flourish and a determined expression on her kisser, ‘Hello. Here I am, deal with it.’

As you will have guessed from the loyal followers of Hayley’s blog it will come as no surprise that Sarah has Down’s syndrome. And she doesn’t just happen to have Down’s syndrome, an oft used phrase by proud parents when describing the remarkable achievements of their offspring, Sarah has Down’s syndrome and it has affected her throughout her life thus far and will continue to do so. But without it neither would she be who she is - nor indeed would our family be who we are.

I am sure that we have all experienced similar feelings at the births of our babies with the extra chromosome. There was the inevitable chain reaction of shock, horror, tears, acceptance and love - all those emotions spread over a number of years. I wrote in Sarah’s biography ‘A Minor Adjustment’ the life affirming effect that children and people with Down’s syndrome have upon the world but shrank from the assertion that ‘Every home should have one.’ But it is true that Sarah and her friends have changed our lives in unimagined ways since her birth.

I don’t know about other families but the Merrimans have become a little obsessed with children and adults with Down’s syndrome. My wife Alison, who is now at the stage where babies and toddlers hold little interest, comes over all soppy and maternal in the company of a young child with Down’s syndrome. At a crèche for Down’s Syndrome Association conference she came close to an out of body experience. My eldest son Daniel is studying law with the aim of being a disability lawyer and is involved in coaching at North London United - a football team for children and adults with DS. My youngest son, Joel, has helped out for years at a dance and drama group for teenagers with Down’s.

If I see someone with Down’s syndrome I want to know all about him or her. Their story, what they do, who their people are. Once, at a wedding, my Daniel, and I spotted who we thought was a toddler with DS in a pushchair. We stared at him from all angles, indulged ourselves in whispered discussion, weighed up all the possibilities without having the confidence to make an approach. It was only when Dan and I shyly introduced ourselves that we discovered that Sarah had already accosted the child’s mother and asked ‘Has he got Down’s syndrome like me?’ He did and his mum was charmed by Sarah’s confident and no-nonsense approach.

It was the same at Number 10 some years ago when we were invited to a reception by Sarah Brown. We were all wondering if we would get a chance to meet the PM, but didn’t like to be too inquisitive. Sarah strode past General Petraeus, dignitaries and various flunkeys, and marched up to her namesake and demanded to know, “Where’s Gordon?”
And it’s not just the door of number 10 that Sarah has opened for us. Her impact on my professional life has been immeasurable. Through her I’ve had a radio series, I have served as a trustee of the Down’s Syndrome Association and have been given the opportunity to write several books connected with the subject. On a personal level, even more importantly, are the valuable lifelong friendships that we have struck up with a number of other parents.

We have been lucky in that Sarah is in relatively good health, was supported admirably in mainstream school and Sixth Form College by the much maligned London Borough of Haringey and is flourishing.  Fortunately Haringey have continued their support and Sarah is now in her third year at Foxes Academy in Minehead, where she is learning catering and hospitality and loving every minute. She works in the hotel and lives independently in minimally supported housing which she shares with seven other ‘learners’. ‘Foxes’ is a brilliant place that encourages independence with just the right amount of assistance and encouragement. Sarah has a boyfriend, Daniel, who has Autism and is a true athlete. He is an excellent swimmer and has been selected for the GreatBritain’s Special Olympic cycling team and Sarah has supported him in various competitions.  Who’d have thought? My daughter the WAG . . .

Of course there is much to be done: iniquitous spending cuts are causing untold distress, a post code lottery still exists in terms of resources and the recent MENCAP report about the treatment of learning disabled hospital patients is horrifying. But we have come along way from the days when babies with Down’s syndrome were written off at birth, children were denied a legal education and adults were deprived of some medical interventions. There is now the opportunity of a life fulfilled and despite all those initial heartaches, we just couldn’t imagine life without our daughter. And thinking about it now, in retrospect, I think I was wrong all those years ago. There is one thing of which I’m quite sure.
Every home should have a Sarah . . .

A MINOR ADJUSTMENT is now available on kindle 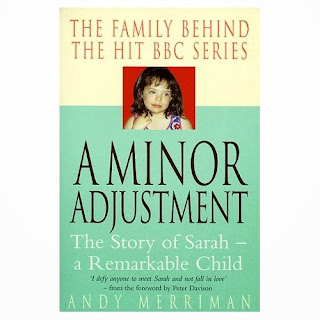