Explaining the Radio Silence: What Have We Been Up To?

Sometimes life rattles by at such a pace doesn't it. I mean really, where does the time go?
There are so very many things in the air at the moment but I just don't seem to be able to find the time to sit here and share them with you over a cup of tea.
My friend Emma says that she enjoys a little catch up newslettery kind of a post once in a while, so here goes...


Something for the Weekend

We've been busy on the media front. A couple of months ago we were interviewed by The Guardian Weekend Magazine for a big spread about Down's syndrome. The piece has been on hold for a while and I had to promise not to talk to any other publications, (it's hard for me to keep quiet but I did!) but the time has finally come and it should be in this Saturday 17th supplement.

I'm nervous, I always feel very vulnerable when we go public as a family, but I trust the journalist implicitly. And to be in a paper I often actually buy is quite a novelty. I still won't be reading the comments though.

Changing Perceptions in Sequins and Glitter

Then back in August Natty and I went up to London for a photo shoot for the UK's largest selling glossy magazine. It's for the Christmas edition which comes out next month, so more about that nearer the time...but needless to say I am bursting with pride that they wanted a little model with Down's syndrome within their posh pages.  Natty certainly is changing the face of beauty one smile at a time.

Did I tell you she called a fellow passenger a 'big fat pig' on the train on the way there though? She did. She actually did. She wasn't, she was lovely and brushed it off with a laugh. Lucky.  *Sigh* 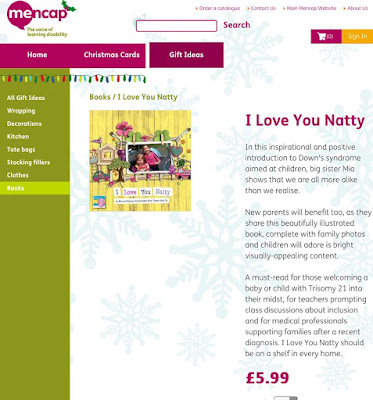 Mencap have taken two large boxes of our little book for children I Love You Natty to sell in their Christmas Catalogue this year. We are so very excited to be able to reach more young families, support groups and school this way.

*shameless plug*
And with profits going to the learning disability charity, what better reason that to buy a copy for someone's stocking this season.

Remember we popped up to Edinburgh in August to make a podcast film with Hazel Powell and the NHS Education for Scotland (NES), and meet nurse and midwife trainers and well as the lead nurse for Scotland? Well, the film is finished and nearly ready to share with the world. We've watched it and hope that it will provide a springboard for discussion in medical professionals' training, particularly in the arena of delivering a diagnoses and supporting new parents. I am quite certain that it's a powerful watch.

Last week, I headed over to Northampton (which turns out to be incredibly tricky to reach from Cornwall!) for the National Portage Service Annual Conference. I was lucky enough to be able to share our journey and experiences of Portage with other families and professionals, as well as learning so much from the other speakers, including Paul and Emma who share a house together and live independently with support.


I've had a couple of very exciting writing projects to get my teeth into as well of late. I was asked to produce a chapter for a book on improving the healthcare of people with a learning disability which is just about finished. Well, it's been submitted but I keep tweaking it and writing to the author with an updated file.
Must. Leave. Alone.
Sorry Steve.

The British Medical Journal also asked for an article for doctors working with adults with Down's syndrome. With a massive amount of input from actress Sarah Gordy from Wood for the Trees, and speaker James Hamilton, who both have Down's syndrome, as well as the General Medical Council, the piece is nearly finished. I've really enjoyed working on it and have learnt a great deal in the process.

Oh, and The Department of Health published a little piece about Natty starting primary school as part of their #BestStart0to19 campaign last week. You can read Transition into School: Small Steps for Little Ones with SEN on Viv Bennet's site at here.


MAD Blog Awards
I was an emotional wreck after being announced the winner of the MADs Blog Award for Outstanding Contribution. To say I felt over-whelmed was an understatement. My face mostly looked like this all evening:

I bumbled through an ad hoc acceptance speech. And cried. A lot. Thank you to everyone who put my name forward. It really means such a lot.

Mumsnet Blogging Awards
Then more excitement. Mumsnet is also a large network of very serious writers and I could never have imagined that Downs Side Up would be chosen from hundreds of entrants as a finalist in the Campaigner category of their blog awards, alongside the simply incredible bloggers Comeback Mum and Complicated Gorgeousness, all winners.

I actually had a bit of a funny turn when I saw this news but am now looking forward to a group hug with the others at Blogfest, coming up in November.

So many of my inspirations and gurus are also listed, from teaching staff, to nurses and self-advocates, as well as fellow bloggers. We are all working together for better understanding and equality for those with a learning disability. So pop over and have your say here.

I think that's it for now. We are off for a family break together shortly and that is the best news of all. Uninterrupted time with our girls. Because at the end of the day, we are just an ordinary family, doing what ordinary families do.