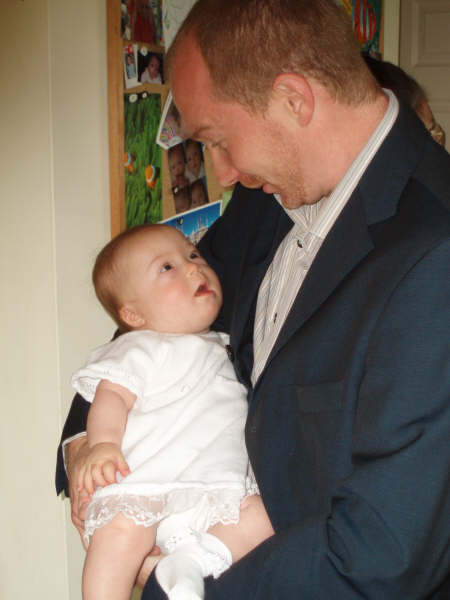 Well where do I start with this blog post that  my sister asked me to write?

It seems hardly possible that the next few paragraphs will summarise 5 years.  The time has passed so quickly but I can still recall some of the early events as if they were yesterday….
The lead up to Natalia’s birth was, I imagine, as typical as any family.  We were all super excited with the prospect of another member joining us and I was excited about becomingan uncle again.  Many trips were made to my sister's house to help out looking after Mia, and we enjoyed planning for the future over many meal times.

I will start my story from when I first heard the news...

Bob phoned me on my mobile and I was sitting at my desk at work. It was around 3pm and I remember him saying that Hayley had had the baby, she was a girl.  And in his very typical softly spoken voice, which I can still hear to this day, he said she had Down's Syndrome.  My first reaction was disbelief and I questioned his comment, almost thinking he was joking.  When I look back, I realise how silly this was, but now feel that my reaction was because this sort of thing happens to other people…. (4 years previously a work colleague had a son with Downs and I remember vividly thinking I hope that doesn’t happen to me.  I moved from the company and so did not follow the progress of his son.   My perception has obviously changed since then.)

After putting the phone down from Robert I remember feeling in total shock. I stayed at work for another hour at the most and drove home.  On the way home one of my closest friends called me, as usual for a chat during our commute.   He asked how I was and I attempted to tell him that my sister’s new daughter had been born with Down's Syndrome, but I couldn’t.  I burst into tears and just couldn’t talk.  The feeling was of disappointment I guess, and immense worry for what the future would bring.  This child was not 'healthy', or 'normal', which is what everyone says when a baby is born.  We have a disability in the family.  These were the thoughts running through my mind.  When I think back this was purely because I knew nothing about this condition and so I was speculating…  My friend tried to chat but I ended up pulling over and putting the phone down.  I sat in a layby until I could control my tears and then drove home.

The next thing was to get down to Hayley's, a 6 hour drive, as fast as possible.  I booked the rest of the week off work, drove from Essex to Sussex that night to collect my mother, and then got up at 4am the following morning to allow us to arrive in Cornwall for breakfast.
Those next 24hrs I remember crying more than I had in years. Almost more than I had when a family member had died.  This now seems very strange, almost as if we were grieving about the loss of a “perfect” child instead of being happy we had a new little lady in the family.

We visited Natalia that next day and she was so tiny and fragile in the incubator.  Unable to hold her or have all of those enjoyable photo opportunities that usually take place when a new baby is born, I really felt like were looking in from the outside. I remember thinking and saying that we need to be positive.  We need to be saying all of the right things and being positive.  I hated the thought of Natalia laying there and seeing all of us unhappy.  What would she be thinking?  She would think was she that bad?, Whydon’t they like me?  Maybe I shouldn’t be here?  Maybe I am not wanted.  And that would make herunhappy.  The thought of thislittle baby unhappy was not on the agenda so we had towork through it.  I probably told my sister all would be alright, but deep down I had no idea, none of us did, but we had to think positive.

The next day we had the Christening.  My niece, Mia, was unable to come into the room as she had a cold, so I stood with her outside the glass window and held her up during the baptism.  I remember she got very heavy after 10mins, but I couldn’t let go.  We both touched the glassas if to get closer to Natty, but that was as close as we could get.  Hayley and Robert frequently looked atus to keep us as part of the group but it was very hard.  Mia was fantastic and so mature in understanding what was going on.  I have never felt so close to my sister and mother until that moment.

Something special happened and I knew our family would never be the same again, we would be closer,
and this was all because of Natalia.

So day 2 and she had already changed our world for the better….. If she could do that after 2 days then imagine what she could do after 5 years.

My outlook on life changed overthe coming months.  I became completely intolerant of people moaning about trivial things and started to move my goals in life from material things, to experiences to be had.  I also became very sensitive to people saying anything derogative towards people with disabilities or learning difficulties.  On a night out in London with work colleagues I overheard someone saying that another person was 'mental'.  I instantly reacted and challenged them, which lead to a full blown argument of which I was not goingto back down.  Anyone who knows mewould say that this is very much out of turn, but this was something that Ineeded to stand up to.  It’samazing how narrow-minded people become when they are exposed to very fewexperiences.  They skim along the bottom of life thinking its straight forward and easy and that everyone elsewith a challenge is doing something wrong...

This leads us up to the naming ceremony.  As previously mentioned Natalia was Christened soon after her birth, with just immediate family present.  It seemed fair that a larger party should now be held. However to keep it intimate and personal the party was held at Hayleyand Bob's home and we were invited to say our own words instead of having aservice.  This turned out to be oneof the most moving experiences of my life.  Family and friends saying what they felt and giving some ofthe most heart-warming words of support and comfort to us all.

Obviously as 'Uncle Carl' I also was required to say my piece.  I thought long and hard about this, wanting to ensure that I said the right things.  I decided that to say Natalia was fantastic and we were lucky was predictable, and on reflection of what to say I was taken straight back to that moment when Natalia was first born and I thought how sad she would feel to look up and see us all so upset and crying.  She would wonder why we were so disappointed and that would make her feel bad.  It was then I decided to say what I felt Natalia would say if she could have had her speech that day.  She would have been pleased to have been here, happy that her parents and sister were looking after her.  How she was looking forward to her life with everyone here.  I can only hope this came out in the right manner...

During the next 5 years she has kept us focused on what is and isn’t important in life.  When she was strong enough, there was avisit to Bristol hospital for a heart operation to take care of.  Melissa (then my girlfriend and now mywife) and myself travelled to Bristol to look after Mia for the day whilst hersister was having the operation. We went to Bristol zoo and had as much fun as was possible…  we saw children that day in Bristol hospital that recalibrated my view of the “perfect child” significantly.  What is perfect?  What is normal?  Is normal boring?  Challenges are what make us the peoplewe become.  Just because Natalia requires more support than someone else, why does that make her disappointing?

We should be thinking that she is like the Porche of the human race. She needs extra fine-tuning but she can bring so much more fulfilment and fun to life than an equivalent Ford Focus that’s sensible, practical and reliable.  (Forgive me, I am an automobile engineer and this analogy works for me!)

So on that note we are up to the present day.  Amazed at the progress, pleased how so many people can be proved wrong, and excited with the possibility that life has no limits.

We can be set in our ways, but shaken out of them by remarkable people, even if they are only 5 years old……