Review of Something Special Toys by Golden Bear

I have never done a product review before.
It's not that I've never been asked, I've refused quite a few.  You see, I really want Downs Side Up to remain a haven for those seeking information about Down's Syndrome and I don't want them to stumble on the site and be hit by irrelevant reviews as the first thing they see.
However, I have always said that I am not opposed to doing a review of a product that was relevant to my readers, one that I would actually go out and part with good money for, one that would stimulate and educate my girls. I was waiting for the right product to come along.

Well such an offer arrived and I jumped at the chance to trial and review none other that the much anticipated... long awaited... desperately needed... new range of...

SOMETHING SPECIAL PRODUCTS by GOLDEN BEAR.
Yes, that's right, you heard me correctly, MR TUMBLE TOYS are hitting our shops right about now! 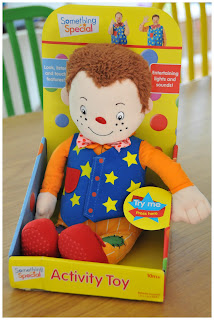 Now I'm sure you all know who Mr Tumble is and have sat through hours of Someting Special, but for those that hail from Jupiter, Mr T is not someone from the 80s hit show The A Team, but instead a zany character on the CBBC TV hit children's show Something Special. Together with his alter ego Justin they find things that are in Mr Tumble's yellow spotty bag, using a combination of speech and Makaton, the invaluable sign language used by many parents of children with speech delay, and increasingly children without any language issues.  To read more about our experiences of using Makaton as a family, click here.

The package arrived (sadly not delivered by the effervescent Mr T himself) and I eagerly opened it.
We had been given 3 products to try, although there are more in the range. I decided to show Natty one product at a time, making her shut her eyes before I put them in her hand to enhance the surprise. She is, after all Mr Tumble's biggest fan.

So who are these products aimed at? I'd say all pre-schoolers, any child who loves Something Special and many children who have additional needs and who use Makaton as a means of communication.

A set of 36 flashcards that make up 18 different pairs. Each card features an icon or a character from the show as well as a small picture of Justin acting the Makaton with the word clearly written below.
The cards are of comparable quality to other flashcards in our cupboard and are small enough and sturdy enough for little hands to hold. The images are clear and visually stimulating and Natty was familiar with all of them.
I would have found the word and sign repeated on the reverse of the card useful, so that I could see and sign whilst holding the card up to Natty to identify.

Everyone loves sets of matching cards for there are so many things you can do with them. So a set with your Makaton super hero on them will be a must for most families.
We played Find the Matching Pairs with the cards face up, Find Matching Pairs Memory Game with the cards face down and Snap. I also spread a selection of cards on the floor and asked Natty to find and stand on one. And finally I gave her one card (eg boots) and told her to scuttle off around the house to find the item. The possibilities are enless...

Children can listen to 1 of 3 of their favourite characters on the phone by inserting a disc with a picture of the character into the phone. (Spare 2 disks can be stored in the back of the phone when not in use). When you press the chucky button at the bottom the characters say familiar phrases which children will love to copy or respond to.
Natty whispered 'I'm fine', when Mr Tumble asked how she was.

Again the product is small and chucky enough for little fingers or to pop in your handbag for trips out. The volume is quiet enough to put to your ear without being deafening or alarming (or annoying) and the button is easy to locate and press. Other phones on the market do more, but sometimes simplicity is the key as children will quickly learnt to press and get an immediate response from their favourite characters.
I think in time the stickers on the phone and character discs might peel off (depending on how dextrous and inquisitive your child is).

Finally, I gave Natty the Mr Tumble Activity Toy  (around £17).

She was delighted and squealed 'oooh, Mr Tumble!' and planted a large kiss on his cheek. I'll say straight away that this will be the toy that everyone wants for Christmas or birthday this year and it will be the one that sells out. So buy it well ahead of December. You have been warned.
The toy is soft, colourful and appealing to look at (although slightly slimmer and younger that his on screen counterpart. Sorry Justin ;) ) When you squeeze his hand gently he says a selection of phrases clearly and audibly. His nose lights up (perfect for taking to bed), there is a rattle in his hand to stimulate the senses,  and children can unvelcro his shoes and coat. The toy has quickly become a companion for Natty and her big sister, who thinks it's hilarious to make up conversations with him 'Do you like my waistcoat?' 'Yes, Mr Tumble, it's spot on!'
This doll will have universal appeal to girls and boys, is the perfect size for a snuggle and easy to use even if you have manual difficulties.

I understand that there is a tea set and a spotty bag in the range too.  I might just be tempted to put those in Santa's stockings. So, the range comprises toys at different price ranges and to suit different children. I'm sure there is something for everyone in there.

(We were given these toys to review but received no payment in addition. I have been honest in my appraisal of the products. They will be widely available in supermarkets, online and all good toyshops very soon.)