The next in our daily guest posts is from Lara who writes beautifully and with such grace about her family's journey. What strength and love they show.

March 21st Will Never Be The Same
Lara Cetrulo Thomas 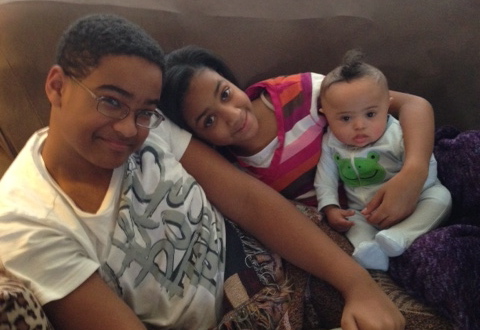 One year ago, on March 21st, 2012, I got the call I had been dreading.  I knew it was him -- the doctor who would give me the news that would change my life forever.  He had told us, quite unsympathetically, that we would only hear from him “if he had bad news.”  So when the phone rang, and his number popped up, I knew.

Later that evening, as my husband and I sat prayerfully and tearfully considering our future with a child with Down syndrome, a sense of peace and calm settled over me.  I started to count my blessings, and realized I had them in abundance.  I had a beautiful family, strong faith, and caring, supportive friends.  I could feel my baby boy moving and stretching and kicking in my ever growing belly.  He was strong.  I could feel it.  I knew he was a fighter.

I began my research and information gathering in earnest.  I learned everything I could about Down syndrome.  I learned to cull out the often negative, outdated and archaic stereotypes.  I learned to choose doctors who supported our decision to cherish our unborn child, and give him a chance at a good life, and to dismiss those who didn’t.  I learned to lean on the support of so many other mamas who had made this journey before me.  I found comfort in the kindness of complete strangers, through websites and blogs and on-line support groups.  I networked with families in our area who had children of varying ages and abilities with Down syndrome.  I looked at these beautiful kids through new eyes; through the eyes of a mother.  I learned how frustrating it can be to have such little control over what’s happening in your own womb, and yet how preparation for what is to come can be so therapeutic, and can make you feel as if you are reclaiming some control.  I learned who my truest friends were, and how to deal with those whose response to our situation was unintentionally hurtful.  I learned the meaning of true, unconditional love, and the fierce protectiveness one can feel towards her unborn child.  I learned to hear the ugliness in words commonly misused – like the “R” word.  It took on a totally different meaning for me, and I learned that it’s not enough to say you don’t like unkindness, bullying or exclusion of someone different, but that you have to take action to affect change in people’s perception, because now it is personal.

When Jonathan arrived on July 22nd, 2012, I was unconscious.  He had to be taken by emergency C-section with me under general anesthesia because we had lost his heartbeat.  I remember my last thought as the anesthesia was taking hold – “Please save my baby.”  When I opened my eyes, through my fog, I asked where he was.  Had he made it?  “He’s beautiful,” my husband said, “he’s perfect.”  And in fact he was.  When I finally held him 24 hours later, my heart melted.  His almond-shaped eyes, perfectly pink rosebud lips, button nose and wispy mohawk were so beautiful.  His tiny 4 lb body fit perfectly into my arms.  He was no longer a “diagnosis.”  He was my baby, and his Down syndrome seemed such a small, insignificant part of him.  He was welcomed into our family by his proud parents, a brother and a sister who adore him beyond measure, and a host of other family and friends who have never left our side.  He has grown strong and is smiley and giggly and loves Goodnight Moon and to be tickled under his ribs.  He’s a big fan of sweet potatoes and has a fondness for Elmo.  He hates to be alone, and thrives on the abundance of snuggles he gets every day.  He loves to sit up and is working on perfecting his roll-over skills.  We don’t know exactly what the future holds for Jonathan, but whatever the case, he’ll never have to walk alone.  We will be his staunchest advocates, his fiercest protectors, his loudest cheerleaders, and his biggest fans.

I’ve heard it said that there are moments which mark your life.  Moments when you realize nothing will ever be the same, and time is divided into two parts – ‘before this, and after this.’  March 21st, 2012, which ironically was World Down Syndrome Day, was our ‘before this, after this’ moment.  As we come upon March 21st, 2013, I reflect on how our life has been ‘after this,’ and I have to say, it’s been pretty darn wonderful.