Today's Reader's Guest post is from Yasmin, Mum of Ammarah and Safina. I could relate to so much of this story, from the shocked beginnings to chatting to passers by at length, to the current talks to professionals. 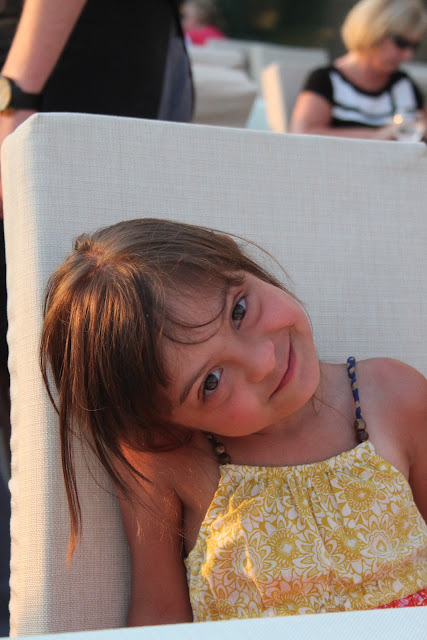 I took every bit of help offered.  With hindsight I did some things too late and other things too early.  Certainly I attended a Down’s Syndrome support group too early, when Safina was probably little more than six weeks old.  I was totally overwhelmed.  The mothers seemed so angry and negative.  This service hadn’t delivered, that expert was useless, still no progress in this area.  Not to mention the list or acronyms that meant nothing to me.

I came home totally bewildered and felt like I never wanted to leave the house again.  Still to this today I am reluctant to attend similar groups for fear of the same occurring again.  I know this is illogical and means my family and I are missing out on some great opportunities but you have to do things your own way – one size certainly does not fit all!

Other early experiences were wonderful.  My health visitor and midwife arranged for me to talk and eventually meet another local mum with two daughters, one who had Down’s Syndrome.  It was a revelation to meet someone who was very honest, but also very positive.  Someone who could show me that life would again be normal while also being different.

Safina’s consultant also referred us to the Genetic Counselling team at St Mary’s Hospital, Manchester.  This appealed to us both I think because we are both, on the surface at least, logical people who deal in facts.  At our first consultation, as soon as I opened my mouth I burst into tears – so much for being a logical person!  The department was then located in an old, run down, Victorian building.  It appeared dirty and smelly.  It was depressing.  The building reflected our mood at that time.  The counsellor answered all our questions, even though some of them were not the answers we wanted to know, and sometimes his answer was “We don’t know”.

About four years later were once again referred to the Genetic Counselling team.  This time because we were considering having another child and we wanted to try to understand fully what risks that carried.  By this time the department had been relocated to a brand new building.  All shiny white.  More like a hotel than a hospital, the waiting room had stunning views over Manchester through the huge windows.  The building reflected our mood now.  Bright, positive and forward looking, although just like the building had the odd lift that didn’t work, we too had days where the simplest of things seemed like climbing Mount Everest.

A little over a year later the counsellor contacted me again to ask if I would give a talk to a group of students studying a Masters in Genetic Counselling at Manchester University.  There are very few places in the UK where this course is offered (I think just two) and the student numbers are low.  It was not as daunting as it might read.  It was essentially a chat with perhaps ten students, all women.  The counsellor had briefed me on what she had wanted me to cover which was essentially to talk about the experience of having a child with a genetic condition from delivery of the initial diagnosis onwards.

So I sat at a round table with ten strangers and told them about some of the most significant moments of my life.  I told them how I had an uneventful pregnancy and an amazing, natural birth.  How I had watched the paediatrician examine my daughter, thinking all babies are examined by a paediatrician within minutes after birth as my eldest daughter had been ventouse, so this to me was normal.  I had watched him examine her hands, knowing what he was looking for, but at the same time thinking this was just routine.  As he picked her up to give her to me I said “Is everything alright?”  It was a rhetorical question.  I had not expected anything other than “Yes” in response.  I remember his response “You have a beautiful baby daughter, but…” and my world fell apart, or so I thought.  At this point the counsellor leading the session asked me to pause.  She explained to the gathered students how the majority of parents will always remember to the minutest detail how they heard the diagnosis and why it is so important to get it right.

I went on to tell the group that a year or so later I met the paediatrician who had delivered the news to us that he suspected Safina had Down’s.  It was at a children’s music activity.  I was waiting to take my children in and he was waiting to collect his daughter.  He recognised me, but it took a while before I recognised him.  Then suddenly the penny dropped.  “Frank” I exclaimed.  I had remembered his first name.  That is how he had introduced himself to us on Safina’s birthday.  And he remembered Safina’s name.  He asked how we were getting on and we chatted.  He told me that he would always remember my husband.  He said “Your husband looked as though I had ruined his whole life!”  Well what can you say to that?

I remembered initially my overwhelming desire to tell everybody that Safina had Down’s Syndrome.  It was quite irrational.  People had only to glance at the pram, for me to be passing on the diagnosis.  This was then followed by a period where I delighted in people’s “fishing” strategies.  Unable to tell for sure whether Safina had Down’s or not, the myriad of questions you would be asked from complete strangers.  Ranging from “She seems well, really” and “I suppose she sleeps a lot” to the cringing “They are all so loving aren’t they”.  My usual response would be to smile and raise one eyebrow, and so not give anything away.

I told the students that at times when Safina was small, although I knew the importance of early intervention, I felt like they were so many specialists and experts involved in her life, at times I felt guilty for going with mother’s instinct.  Over time I have learnt that above all else we are her parents and know her better than anybody else (except of course herself).  We have grown in confidence.  Whereas at one time I would have done as I was told, I will now fight for what I believe is best for her, on the grounds that I am her mother. You learn gradually that actually as a parent of a child with Down’s you are the expert.

What was most revealing to me was the questions they asked, or more specifically my answers to those questions.
They asked me how our family and friends had reacted to the news and how they had supported us.  I explained that those closest to us had been great and I couldn’t imagine how we could have got through those early days, weeks or months without their support, and still couldn’t to this day.  Others had drifted away, but had been replaced from most unexpected quarters.  In answering the question I realised it was truly those who were “closest” to us who had and still are the greatest support.  Those who really understand us and our family.

I described how some people’s initial comments had hurt me and how even years later I could not just forget.  The comment on hearing of Safina’s diagnosis of “So, you didn’t have the tests!” really affected me. I couldn’t understand why, until I read a piece by another parent which explained, that of course the comment carries the implied assumption that had you had the tests you wouldn’t have carried on with the pregnancy.

I had told how my husband had really struggled to bond with Safina, not that you would know it now – she is a real Daddy’s girl and has him wrapped around her finger.  One of the students asked when had he bonded and what had happened to make this happen?  I had to think really hard and I as I started to speak I suddenly realised.  Safina had suffered two bouts of serious pneumonia and on the second occasion the consultant had advised that he thought it might be necessary to test for cystic fibrosis.  Fortunately the test wasn’t necessary as later X-rays showed her chest to be clear.  I realised that it was after this that the bond between father and daughter really began to grow, and perhaps it was initiated by the thought that we might lose our precious daughter.

I summarised by trying describe that on learning that Safina had Down’s Syndrome I became immediately aware of this immense parental responsibility.  It seemed initially completely suffocating.  But my own experience had shown that in many ways your responsibility towards a child with Down’s is no different than for any other child, it’s just that emotionally it’s like a car crash rather than a gradual trickle.

As the session finished I felt both exhausted and exhilarated. It had been a huge personal journey.  Subsequently the counsellor wrote to me and said “I think that the students will live with those thoughts for a long time and I know that they will guide their practice in many ways.  I would like to think that you have made a difference as to how they will develop as genetic counsellors”.
I have learnt that it’s good to talk, to be open and honest.  It’s not always easy.  It’s also good to listen, both to others and to yourself.  That’s not always easy either.  But most of all, we can all make a positive difference, and we all do every day, to our wonderful, beautiful children.
By Hayley Newman at Downs Side Up Downs Side Up