"Every once in a while an experience shifts the
tectonic plates of your soul.
Powerless to stop the raw emotions held beneath,
they flow forth and you have no choice but to face them,
accept and deal with them before filing away and
carrying on your life, a little bit wiser."

Watching the breathtakingly powerful Myrtle Theatre play Up Down Boy by Sue Shields was, for me, such a moment.  For in one hour it condensed, amalgamated and highlighted all the challenges and worries of parenting a child with Down’s Syndrome and made me smile and laugh aloud at the lessons we all learn along the way, the silver linings and the eccentricities that make our worlds so wonderfully unique. 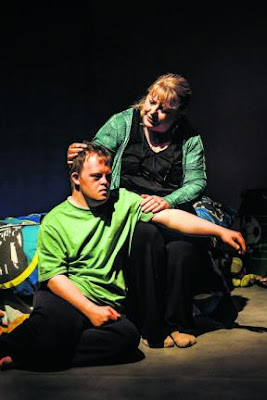 Sue crafted this important play together with her son Nathan Bessell who plays Matty, a teenager with Down’s Syndrome. We watch as he and his mother Odette, perfectly portrayed by Heather Williams, prepare for him to leave for college.

I assumed the play, hosted by The Shed at The National Theatre would look at Matty’s hopes and fears as he prepared to leave home as millions of teens do each year, that it would highlight the similarities that young people with Down’s Syndrome have with those that don’t; what to pack, who they would miss, what life would be like. And it did, but it was about so very much more.

From the outset I was drawn into the simple set, Matty’s bedroom complete with all his favourite toys and prized possessions. As his name was urgently called by his mother for the first time, I heard my own voice calling the name of my daughter, Natty. But the similarities didn't stop there. The obsession with favourite CDs, the ability to get ready in slow motion whenever time is most pressing, the way of distracting and focussing on anything but the task at hand. I saw elements of my own child right there on the stage in front of me.

Nods of agreement came first as I mused about how clever it is to have the ability to see straight to how a person is feeling. A parent’s stress is calmed without them realising, simply by distraction, a trip down memory lane, a dance, a hug. That sixth sense that makes Natty such a considerate and supportive member of our community was beautifully represented before me. Watching Nathan perform, I was catapaulted forward a decade.

Then came the laugh out loud moments, which can only happen when the realities of your own life are depicted vividly before you. Much of the humour was encapsulated in Nathan’s stunning dance performances, coupled with animation by Evil Genius that caught exactly his hopes and dreams and how he sees himself. Of course as the parent of a child with Down’s Syndrome I was also heartened to watch how brilliantly Nathan performed on stage. The actor himself, as well as his character became an inspiration.

Then the tears, the unstoppable primal tears which sprang from my heart  the second I heard Matty’s mother recall the brutal delivery of her son’s diagnosis, the life-threatening consequences of a doctor’s error, inexcusable prejudice, her personal sacrifices, the Houdini moments and the worry, the ever-present worry for the future that is with you from the day your baby is born.

And just when I was reaching for my tissues to wipe away my fears and memories, another peel of laughter came. So well placed and so cleverly intermingled.

I looked around the audience of the Relaxed Matinee Performance, (welcoming for those with learning disabilities and their families, for no-one was expected to be silent) and it seemed that only the families of smaller children were dabbing their eyes, shoulders quivering. Teens with disabilities laughed aloud, and their parents joined them, and then sat back with expressions of complete agreement and wise knowledge during the more hard-hitting moments. I think had Natty been there she would have joined in with the dancing, giggled, looked up to Matty. It was the type of play that you took what you needed from, the very best form of art.

I hope and believe that even those in the audience who have never dipped a toe into the world of disability, of other ways of being, will have had their opinions and hearts changed. How could they not?

I sharply realised that I have a long way to go before I have it all figured out. I have never laughed or cried so hard in one hour. And with so much shared experience with all parents present in the audience I wanted to mingle, chat with them, find out how they felt when the lights went down. It was a debrief in many ways and everyone was of the same opinion. Brilliant. Powerful.

Then the huge honour of meeting Nathan and Sue themselves. I tried to tell them what their work had meant to me, still shivering with emotion, but it was difficult to convey.

I came away from the performance more determined than ever to work toward Natty’s independence, but not at the expense of listening to her adult wishes when the time comes. I will not let my worries stifle her individuality and I will take the time to slow down and see the gentle, hilarious, beautiful different perspective on life that she brings to ours.

Thank you to all involved in Up Down Boy, of course for inviting me to the performance, but also for the clarity. The play was hugely cathartic and stayed with me for days. Do go and see it if you can. It will be performed in the Normansfield Theatre at Langdon Down House, home to the Down's Syndrome Association, next month. But make sure you keep your tissues handy.