Downs Side Up: The Non-monetised Financial Times Blog

Advertisers seek to harness the power of parent bloggers

Hayley Goleniowska began blogging two years ago about raising a child with Down’s syndrome. “There was clearly a need for a positive and honest Down’s syndrome support blog portraying a snapshot of a real family. Charities do incredible work, but are more neutral in tone.” Her blogging is a full-time, unpaid job. “I am reluctant to monetise it for fear of diluting its message.”
www.downssideup.com 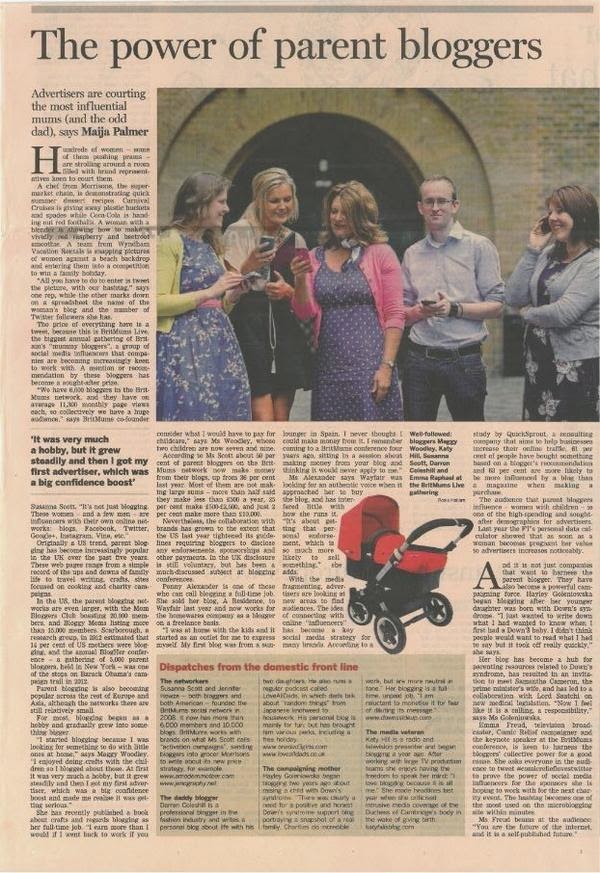 Hundreds of women – some of them pushing prams – are strolling around a room filled with brand representatives keen to court them.
A chef from Morrisons, the supermarket chain, is demonstrating quick summer dessert recipes. Carnival Cruises is giving away plastic buckets and spades while Coca-Cola is handing out red footballs. A woman with a blender is showing how to make a vividly red raspberry and beetroot smoothie. A team from Wyndham Vacation Rentals is snapping pictures of women against a beach backdrop and entering them into a competition to win a family holiday.

“All you have to do to enter is tweet the picture, with our hashtag,” says one rep, while the other marks down on a spreadsheet the name of the woman’s blog and the number of Twitter followers she has.
The price of everything here is a tweet, because this is BritMums Live, the biggest annual gathering of Britain’s “mummy bloggers”, a group of social media influencers that companies are becoming increasingly keen to work with. A mention or recommendation by these bloggers has become a sought-after prize.
“We have 6,000 bloggers in the BritMums network, and they have on average 11,300 monthly page views each, so collectively we have a huge audience,” says BritMums co-founder Susanna Scott. “It’s not just blogging. These women – and a few men – are influencers with their own online networks: blogs, Facebook, Twitter, Google+, Instagram, Vine, etc.”

Originally a US trend, parent blogging has become increasingly popular in the UK over the past five years. These web pages range from a simple record of the ups and downs of family life to travel writing, crafts, sites focused on cooking and charity campaigns.
In the US, the parent blogging networks are even larger, with the Mom Bloggers Club boasting 20,000 members, and Bloggy Moms listing more than 15,000 members. Scarborough, a research group, in 2012 estimated that 14 per cent of US mothers were blogging, and the annual BlogHer conference – a gathering of 5,000 parent bloggers, held in New York – was one of the stops on Barack Obama’s campaign trail in 2012.
Parent blogging is also becoming popular across the rest of Europe and Asia, although the networks there are still relatively small.

According to Ms Scott about 50 per cent of parent bloggers on the BritMums network now make money from their blogs, up from 36 per cent last year. Most of them are not making large sums – more than half said they make less than £500 a year, 25 per cent make £500-£2,500, and just 2 per cent make more than £10,000.
Nevertheless, the collaboration with brands has grown to the extent that the US last year tightened its guidelines requiring bloggers to disclose any endorsements, sponsorships and other payments. In the UK disclosure is still voluntary, but has been a much-discussed subject at blogging conferences.

Penny Alexander is one of those who can call blogging a full-time job. She sold her blog, A Residence, to Wayfair last year and now works for the homewares company as a blogger on a freelance basis.
“I was at home with the kids and it started as an outlet for me to express myself. My first blog was from a sunlounger in Spain. I never thought I could make money from it. I remember coming to a BritMums conference four years ago, sitting in a session aboutmaking money from your blog and thinking it would never apply to me.”
Ms Alexander says Wayfair was looking for an authentic voice when it approached her to buy the blog, and has interfered little with how she runs it. “It’s about getting that personal endorsement, which is so much more likely to sell something,” she adds.
With the media fragmenting, advertisers are looking at new areas to find audiences. The idea of connecting with online “influencers” has become a key social media strategy for many brands. According to a study by QuickSprout, a consulting company that aims to help businesses increase their online traffic, 61 per cent of people have bought something based on a blogger’s recommendation and 63 per cent are more likely to be more influenced by a blog than a magazine when making a purchase.
The audience that parent bloggers influence – women with children – is one of the high-spending and sought-after demographics for advertisers. Last year the FT’s personal data calculator showed that as soon as a woman becomes pregnant her value to advertisers increases noticeably.

And it is not just companies that want to harness the parent blogger.
They have also become a powerful campaigning force. Hayley Goleniowska began blogging after her younger daughter was born with Down’s syndrome. “I just wanted to write down what I had wanted to know when I first had a baby with Down's syndrome. I didn’t think people would want to read what I had to say but it took off really quickly,” she says.
Her blog has become a hub for parenting resources related to Down’s syndrome, has resulted in an invitation to meet Samantha Cameron, the prime minister’s wife, and has led to a collaboration with Lord Saatchi on new medical legislation.
“Now I feel like it is a calling, a responsibility,” says Ms Goleniowska.

Emma Freud, television broadcaster, Comic Relief campaigner and the keynote speaker at the BritMums conference, is keen to harness the bloggers’ collective power for a good cause. She asks everyone in the audience to tweet #comicrelieflovestwitter to prove the power of social media influencers for the sponsors she is hoping to work with for the next charity event. The hashtag becomes one of the most used on the microblogging site within minutes.
Ms Freud beams at the audience: “You are the future of the internet, and it is a self-published future.”

Dispatches from the domestic front line
The networkers
Susanna Scott and Jennifer Howze – both bloggers and both American – founded the BritMums social network in 2008. It now has more than 6,000 members and 10,000 blogs. BritMums works with brands on what Ms Scott calls “activation campaigns”, sending bloggers into grocer Morrisons to write about its new price strategy, for example.
www.amodernmother.com
www.jenography.net

The daddy blogger
Darren Coleshill is a professional blogger in the fashion industry and writes a personal blog about life with his two daughters. He also runs a regular podcast called LoveAllDads, in which dads talk about “random things” from Japanese knotweed to housework. His personal blog is mainly for fun, but has brought him various perks, including a free holiday.
www.onedad3girls.com
www.lovealldads.co.uk

Hayley Goleniowska began blogging two years ago about raising a child with Down’s syndrome. “There was clearly a need for a positive and honest Down’s syndrome support blog portraying a snapshot of a real family. Charities do incredible work, but are more neutral in tone.” Her blogging is a full-time, unpaid job. “I am reluctant to monetise it for fear of diluting its message.”

The media veteran
Katy Hill is a radio and television presenter and began blogging a year ago. After working with large TV production teams she enjoys having the freedom to speak her mind: “I love blogging because it is all me.” She made headlines last year when she criticised intrusive media coverage of the Duchess of Cambridge’s body in the wake of giving birth.
katyhillsblog.com