Three years ago I hosted a series of guest posts for Down Syndrome Awareness Month. One of them was by Sarah Stevens, who has kindly given us an update. 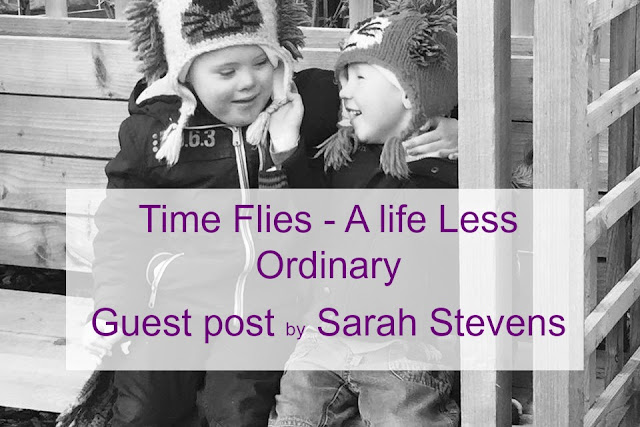 A LIFE LESS ORDINARY – WHAT HAPPENED NEXT…?

It flies by, in the blink of an eye.

In this increasingly bonkers world that we live in, days merge into weeks, weeks into months and before you know it, it’s Christmas again. How is it possible that the subject of my original blog turns eight next month? EIGHT!!!

I must confess that the writing of my original post had more or less completely vacated my headspace. Then by the power of Facebook it suddenly popped right back in there - ‘on this day’ inviting you to review and share your memories.  There it was, staring up at me from my shiny iPhone6 (latest toy, still rather precious about it…), along with all the wonderful comments and praise it received at the time. I clicked the link and read it again, for the first time in three years or so.

And a single tear rolled down my cheek. Not because it made me sad, for I am still proud of it as a record of those early days of this special needs journey. But just because it made me realise how much all our lives have changed since then – and once it was shared again, an update was soon being requested by all and sundry - so here goes….

George David Stevens – now 7 years 11 months old and on the cusp of entering his eighth year in this world. Someone asked me recently whether he is what I expected. What a stupid question. I’ve never had an almost eight year old child with Down’s syndrome before, how am I supposed to know what to expect?! What I do know is that it is almost pointless to read any sort of ‘official’ literature surrounding Down’s – we threw the textbooks out when it came to George a long time ago.

He remains something of the enigma that I described in my original blog; his reading ability is astonishing - put anything in front of him and he’s away. But ask him a question about what he’s read and – unless it is a Spot story or The Gruffalo – he will hide his eyes and say ‘ERM’ very loudly. Like any child his age, he’s got the avoidance strategies cracked. He can recognise three and even four digit numbers (particularly if the latter if his new high score on 100 pin bowling on the Wii), yet ‘more than’ and ‘less than’ often still evades him.

His skill in navigating the iPad puts all of us to shame, and if he can’t make himself understood through speech or signing then he instead offers to tap what he wants into Google to give us a clue. Google. WHAT?!?! I didn’t even know what an e-mail was until I went to University. He would spend hours on (a filtered version of) YouTube if we let him. But he still likes watching ‘In the Night Garden’ and ‘Bing’; thank the Lord we’ve finally moved on from ‘Something Special’ (although Justin – if you happen to be reading this – thanks for all the free babysitting mate!)

His school journey has also been something of an interesting one so far. Those of you that read the original blog may recall that we chose the mainstream option for George. He started at our local infant school, with a full time Teaching Assistant that he truly and utterly adored – he still loves his Partridge. Down’s syndrome is quite probably one of the most complex forms of learning difficulty that you are likely to encounter in a mainstream school; indeed, his Reception teacher could simply not fathom how this child could read, recognise number and letter sounds, yet was still wearing nappies and could not string more than two words together consistently.

He very definitely didn’t fit the ‘mould’ of what the school was used to, and this caused a problem in itself. All of a sudden different resources, strategies and outside agency help was called for. Some of this was embraced, some not. Some staff were willing to just go with where he was and mark progress, others worried because he wasn’t matching the attainment of his peers. I’m fairly sure he spent more time ‘velcroed’ to his TA than should have strictly been the case. But he was happy, he did make progress and came out the other end three years later.

Much praise here has to go to the fabulous bunch of kids that he’s with. They have been together now since Reception, and have known George from the very beginning. Obviously as Year Threes they are now very aware of the differences; but not once have I ever heard a derogatory word, cruel comment or seen them be anything other than fully embracing of him and what he brings to the table. He still has his harem of adoring girls wherever he goes, and one young lady in particular who looks out for him in the most affectionate but non-patronising way. She comes out of school with him, making sure he spots whoever is picking up and gets to them safely before skipping off to find her own mum. They have at least one kiss every day.

It’s quite a different experience so far at the junior school. Willing to work with where he is, rather than trying to force him into somewhere that he’s not comfortable. He’s got the Year Six girls wrapped round his little finger. Working with a different TA but still full time support (who he still likes to kiss and cuddle at the end of every day), but now a far more independent and more mature young man – “I can do it myself” being the current phrase of choice.

Even silly things like they’ve managed to get him away from insisting on a toilet seat to sit down and have a wee, and now doing it standing up. Little things and all that. I hear how well behaved he is – and how incredibly polite – and then in his home-school book it says how he was told off for spitting at his friends. Damn. Although I didn’t really know whether to be secretly pleased about the spitting, as I had been trying to teach him to spit out after brushing his teeth – was this not solid proof that we had achieved that?! Hmmmm…

So school is currently going well. Starting to have preliminary thoughts about what to do when we get to Secondary, but I’ll cross that bridge when someone drags me across it kicking and screaming, dragging my nude heels behind me.

So what of everything else?

Again, those who read the original will know that at that time I’d just given birth to a second baby, this one having only the regular number of chromosomes. Fast forward to now and I have an ever so slightly quirky three and a half year old, obsessed with dinosaurs and who can spin you a tale as long as your arm. I still find it bizarre that all these words can come out of the mouth of someone so little. Although he’s not actually that little at all, having just gone into age four to five clothes and with legs up to his armpits.

Toby adores his big brother and the feeling is very much reciprocated. In fact, the recent improvements in George’s speech have, I believe, been largely down to the quite frankly ludicrous conversations that they often have. They rough and tumble, and I take heart from the fact that George knows exactly how to wind his little brother up – just like big brothers should.

Toby is also towing the family line of not being particularly fussed about coming out of nappies, recently quite happily just announcing he’d weed on the floor when I dared to attempt a day in pants. He moved his dinosaurs out of the way first, though…

But much else has also changed.
In the last couple of years we have moved house twice and I bought my own place for myself and the boys last summer. Ironically, it is my dream house and what I always wanted as the home for my family. Just the ‘family’ looks a bit different to that which I envisaged in the picture in my head. Thanks to good old Slimming World, I shifted almost three stone and then landed my dream job working as a special needs co-ordinator in a large primary school. I absolutely love my job. LOVE IT, LOVE IT, LOVE IT. Most of the time. But it has made me more stressed than classroom teaching ever did. I work with some truly amazing people that keep me (relatively) sane. And it has given me an insight into how this whole school experience is going for George – and where we might head next. I have also just started my Masters degree – beginning with the national award for special needs co-ordination, and then… well, who knows????

I am sat writing this and happened to glance over at the sideboard where my Mother’s Day cards are propped up, waiting to be opened in the morning. I still sometimes find it ridiculous that I am a Mum at all. A mum is someone like my Mum. A more ‘adultier’ adult if that make sense. I have never needed my Mum or Dad more than in the last couple of years, and they have quite literally been life savers on more than one occasion. I couldn’t have done any of this without them, and I will be eternally grateful. They’ve let me make my own (quite often massive) cock ups, and caught me when I’ve fallen. My mum still comes to my house and cooks our tea most Saturdays. The boys have such a close bond with their Nanna and Grandad, which is something that I always wanted for them and I know it is something that they will cherish forever.
I’m going to look forward to re-reading this in a few years’ time, when it pops up on my news feed – although with technology going the way it is, it will probably jump right out of the screen and smack you round the face by then.
Who knows where we will all be? Having launched myself back into the world of 21st century dating, I have become something of a cynic romance wise – to quote the lovely Julia Roberts in Pretty Woman, ‘I want the fairy-tale’. After dabbling in the murky world of online dating (there’s another whole blog post in itself…) I am now *FAIRLY* certain that the fairy-tale does not exist. There’s always a compromise, if you think it’s worth making. I dream of getting married again, and I dream of the perfect man (whenever you’re ready, Mr Beckham…) – but if he’s not out there, then one who will love me just for being me, show me respect and take me and my boys just as we are will more than suffice.

Then we can carry on this life that has become just a little bit more than ordinary.