Here I Am: Off the Rails Film Premiere

Three years ago my life was derailed by divorce.

Our little carriage came to a soul-shaking halt. And the shrapnel of broken hearts and bits of family life lay all around.

And just as my girls and I were gingerly glueing the working parts back together and inching forward, a global pandemic took a sideswipe. It brought fear and isolation in its wake, and stole the hugs of friends' that had quite literally held us together.

So when my dear friend and everyone's favourite actress Sally Phillips asked me to attend the red carpet film premiere of her latest film Off The Rails at the Odeon Luxe in Leicester Square, last week, nothing was holding me back.

Sally is one of my tribe, a woman who oozes love and open-heartedness and who has scooped me up more times than I can remember. It wouldn't be exaggerating to say that my girls and I might not be where we are today if it weren't for a handful of close friends like her. Not seeing any of them for 18 months has been excruciatingly difficult.

So, double-jabbed and full of adrenaline, I chucked a dress and heels into an overnight bag, jumped in the car and headed out of Cornwall for London and that long-awaited hug and the first dollop of excitement in as long as I can remember.

Off The Rails is based on a true story. Three friends in their 50s, Liz played by Sally Phillips, Kate (Jenny Seagrove) and Cassie (Kelly Preston), attempt to recreate a journey across Europe that they were unable to finish in their youth. Along the way they celebrate their late friend's life using the train tickets she left them, on the condition that they take her teenage daughter Maddie, played by Elizabeth Dormer-Phillips.

There are lost passports, train strikes and old axes to grind along the way, as well as new romantic enticements in the form of oh-so-warm Ben Miller and smouldering fox Franco Nero.

The truth in art is made even more poignant by the passing of actress Kelly who died shortly after the film was made. Off The Rails was her final, heartfelt project and is emotional because of the genuine friendships forged between the cast members, the chemistry they clearly had while filming and the raw grief they experienced after losing one of their number. I can't imagine how hard it must have been to watch her on the big screen at a premiere she left a gaping hole in.

Mirroring my life, Off the Rails didn't disappoint. It's a celebration of the bond between close friends of a certain age and, as any parent of a child with additional needs knows already, a lesson in life being more about relishing the journey we're on; however many unexpected hold-ups and diversions there are or whether you get sent on the scenic route instead of the Autobahn you were prepared for.

The destination, how and at what time you arrive there is purely incidental.

Our Tribe: A loving mess

Each of us watching the premiere found a little bit of ourselves on screen that day... I'm pretty sure Sally based her scorned character's angry 'ARSE!' outburst on me... but that's another story.

And how refreshing to see a comedy about middle-aged women that tackles menopause, marriage, money worries and men. And yep, having the confidence to love yourself, your body and the pleasures we thought we'd left behind in our 30s.

The film highlights the sometimes emotional brutality of life and the lessons it forces us to learn against our will; a birth scene symbolising the pain we have to go through before we can break through to new life on the other side of trauma. And that in doing so we learn the most about ourselves and form unbreakable life bonds with a 'family' of our choosing.

As Sally put it on the Chris Evans Virgin Radio Show, "The boundaries around our families get blurred and it all becomes messy. It's one big loving mess." as we have more than enough love to share with other family units. In time of course, as the film shows, it's the grown up Godchildren that keep us adults on the right track when we falter.

For me, Off The Rails not only portrayed but actually facilitated new friendships. The premiere drew closer a group of glorious, vibrant women. Real bonds were made that night, as we not only loved every minute of one of our gang's film, but also swapped stories, found common ground, laughed, cried and felt deep gratitude for our newfound responsible post-lockdown freedom. We talked of our children with special needs, our painful divorces, the trials our teens have faced and of rebuilding our new, wiser selves from shattered pieces. The film was our destination, but the journey into each other's lives was what made it so special.

Proudly striding from Leicester Square and through the cobbled streets in our blister-inducing but beautiful heels. Mine, a nude patent pair of stilettos, purchased as a final straw-grasp in the dying year of my marriage and mockingly branded 'a mid-life crisis purchase' by my ex, got their first ever outing.

Tourists stopped and stared, a surreal moment out of our ordinary lives and a tiny taste of celebrity life.

But how are celebrities made? What renders one human more special or revered than another? For many it is hard work, genius or philanthropy that earns them this status. Some stumble upon fame, others seek it with a be-all-and-end-all passion that is doomed to feel hollow and unhappy.

But that evening, the public, cast, critics and paparazzi alike were about to learn a valuable lesson.

Olly, Sally's son who has Down's syndrome, accompanied his mother on the red carpet, standing by her side as she conducted interviews and posed for press photos. His genuine smile never faltered for a second. He was proud of his mother. And he was proud of himself.

Olly, much like my daughter Natty who also has Down's syndrome, is not constrained by ideas of fame. Olly and Natty treat each and every person as an equal.  No-one is better than another just because of their job title. More importantly, our youngsters have such high self-esteem and bucketloads of confidence to know themselves to be everyone else's equal.

So when Olly looked to the paparazzi and asked them to take his photograph, he took them by surprise. They didn't know how to react. A teen with Down's syndrome wasn't on their check list. But how would it look if they said no?

Olly's huge personality, the photographers' politeness and desire to do their bit for inclusion and diversity got him his way... His smile and unfaltering knowledge that he IS as important as any star of the show won the moment. Olly proudly declares 'Here I am!'

We all need to be a bit more like the women in Off the Rails, honest, real, drawing closer and cheerleading from the wings when the years and negative experiences have driven a wedge between us. Such a delightful film created in a pandemic and premiered for the first time since our cinema seats sat empty for months on end, deserves our joy. And any film that showcases flourishing mature women deserves a whoop and a cheer.

We all we all need to be a bit more 'Olly' too and live each day as if it's our birthday. Do things we enjoy without guilt and see everyone as equal, including ourselves.

Most of all, treat others as you would like to be treated and surround yourself with people who keep you on track.

Love and celebrate yourself.

Be your own celebrity. 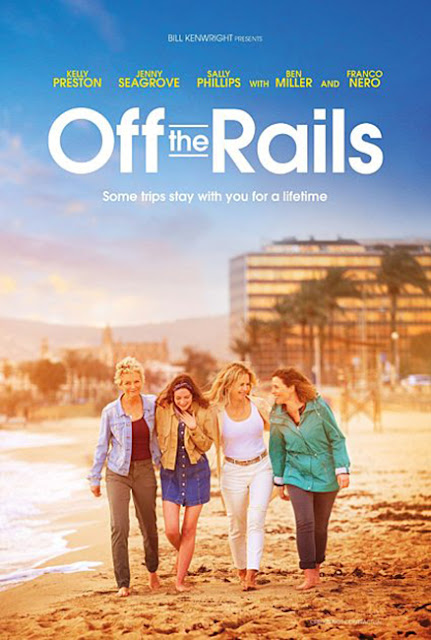 Off the Rails is in cinemas now.

Grab your tribe, a face mask, some popcorn and go celebrate.