Pioneers for Children with Down's Syndrome


Changing the face of beauty - the models with Down's syndrome


When Natty was born we were all struck by her petite fragility. Her features seemed so prefectly proportioned for a baby. That feeling that she would 'grow into' her ears, that I had noticed when I looked at Mia as an infant, wasn't there. She resembled a perfect little doll.

I began to wonder if anyone else could see that she was different. Was the fact that she had an extra chromosome evident from afar? It didn't look obvious to us, until we looked around and realised that other children had a certain look that was not like Natty's.

Never lose an opportunity of seeing anything that is beautiful,
for beauty is God's handwriting --
a wayside sacrament.
Welcome it in every fair face, in every fair sky, in every flower,
and thank God for it as a cup of blessing.
- Ralph Waldo Emerson 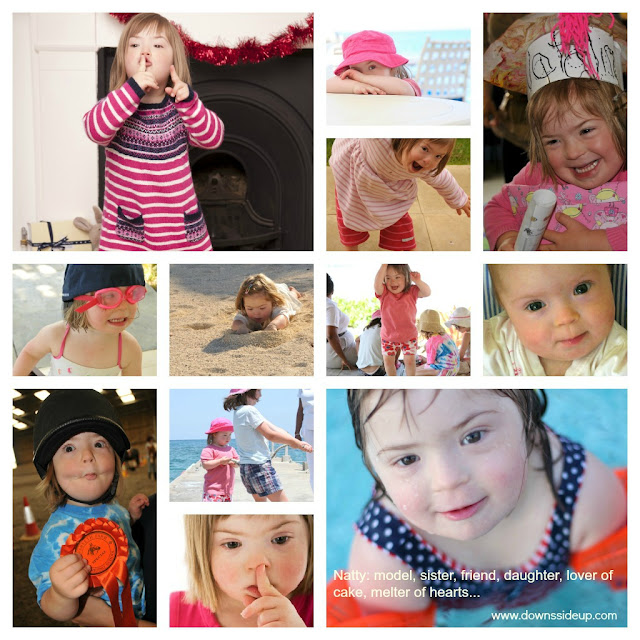 I was struck by how equally beautiful all children were, just in different ways. Strangers obviously thought the same about Natty, because they used to cross the street to tell us. Maybe there was an element of wanting a closer look at the little baby in the sling, but I always stopped to chat. To each and every one of them. (This is why I am late for everything as people who know me will vouch). I never once got annoyed at people for staring, I drew them in and left them smiling. And they all went home with a slightly different perception of Down's Syndrome.

This is where 'changing perceptions gently from within hearts' all began.

When Natty was about 12 months old, I recall walking past a shop window with her and seeing a small poster in a shop window with a happy family group advertising snuggly fleeces. The girl in the photo had Down's Syndrome. She was about 8 years old and gorgeous. My heart skipped a beat. Never before had I seen a child like Natty represented in advertising. I was so overjoyed, so inspired and so happy to see this young lady treated like any other, that I skipped into the shop and gushed enthusiastically at the staff working there. They were lovely, but probably didn't really understand just how much this symbol of inclusion had meant to me.  The shop was Weird Fish. The year 2008.

I guess I filed that memory away, in the 'How I am Going to Change the World' section of my brain.

Years passed and Natty started school. I had time on my hands to mull over our experiences of parenthood, disability, heart surgery, shock, love, life and our family unit of 4. The blog Downs Side Up was born; a way of sharing, inspiring, and releasing.  This is an excerpt from my very first post in November 2011:

"This is a feeling of wanting to get something much more important, very right from the onset.  Of wanting to create something that will lift spirits, give support, bring people together, raise a smile and encourage. Yet all the while providing practical tips and real solutions for the everyday lives of parents and educators who have a child with Down's Syndrome in their lives."

The blog became the hub of Downs Side Up and spokes began to eminate from its core. The memory of that model in the poster returned and I began researching the subject.

I saw a model in the US working for Nordstrom and Target. (And apparently Next had done the same in the UK, but this passed me by sadly. )


I found a modelling agency in Dublin that specialised in models with Down's Syndrome called I Am Able 2 Model. Their books were full but they were supportive and encouraged me to just write around to companies and agencies asking them if they would like to include Natty in their campaigns. I did this, many of my emails were ignored, some received sweet replies saying that Natty was gorgeous but they couldn't use her and then... bingo... Frugi said yes. 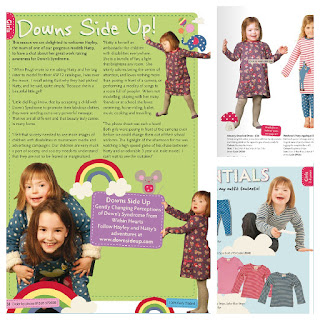 Shortly afterwards Jojo Maman Bebe, everyone's favourite quality brand, famed for their funky stripes, agreed too. They are inclusive employers and were now keen to be inclusive with their models too.

Natty and I excitedly hopped on a train to London for the shoot. 6 hours later we arrived, tired but still full of energy, jumped in the waiting car and whizzed round to the venue where Natty immediately began singing Christmas carols (in June!), riding the willow reindeer and shouting 'Shhhhh! Santa's coming!' to the crew. We were in stitches, and what a diva after such a journey.

45 minutes later we were back in the car heading for the station for our return journey home. We arrived safe and sound, exhausted but having spent a quality day together, full of puzzles and films and books and colouring and music. For Natty, the modelling was just a tiny bit of fun in the middle of the day, unaware of the importance of the barrier-busting occasion.

Suddenly we were sucked into a media whirlwind with TV, radio and magazine articles galore.

At the same time another amazing, tireless and determined Mum, Caroline Playle was doing the same thing. Our children both featured in the Jojo Maman Bebe campaigns. Now the world really had to sit up and listen. And listen they did, because her son Seb White has been snapped up by none other than Marks and Spencer for their Christmas campaign! Again the world of media was whipped into a frenzy and everyone was talking about how scrumptious he looked with his reindeer antlers. He was even taken on for their Xmas TV ad! 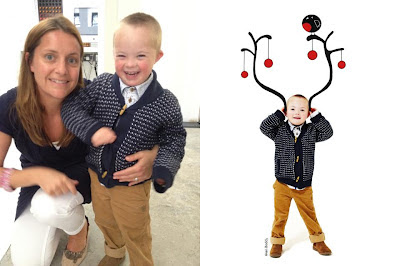 Now the floodgates are open. Other companies are doing the same. Other parents are confident enough to push their children with disabilities forward for modelling. What I really want to see now is a wheelchair user in a campaign, or a teenager with Down's Syndrome, adults with learning disabilities.

But we will get there. One step at a time.

I am very proud to have been a mover and a shaker in this shift in society and I thank all the companies willing to stand up and be different.

This got me thinking about the pioneering parents that have gone before us, those who bravely took their children home from hospital when that was not the 'done thing', those that fought for our children to be firstly educated at all, and then included in mainstream schools if that was what was right for their needs.

I thank the professionals who research all the latest learning techniques for our children. I thank the doctors who pioneered the heart surgery that saved Natty's life. I thank these parents and professionals from the bottom of my family's collective heart.

And to those parents of the future, I promise to carry on fighting, along with an army of other passionate Mums, for change, so that your children get an even fairer bite of the cherry of life.