Little did I know that a trip to Number 10 would provide a life-changing insight into the vulnerabilities of those with a learning disability. 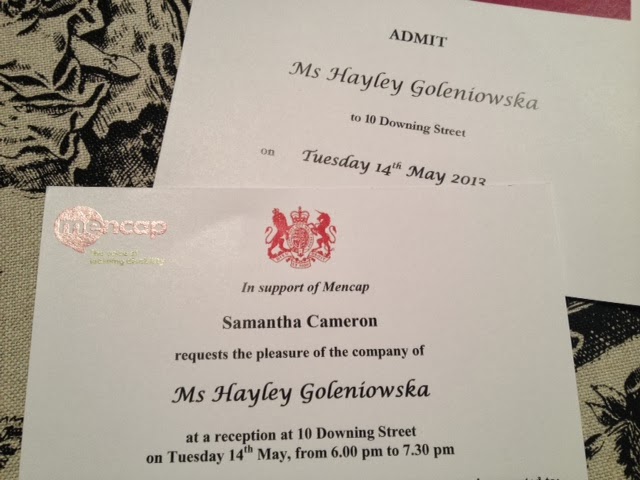 Heading to London from Cornwall for Samantha Cameron's reception at Number 10 Downing Street, hosted by Mencap, was a highly emotional event in my blogging career. The thoughts, feelings and emotions so mixed and so many.

The invitation was delivered by Dave the postman, exactly a week before the event. Dave happened to be the very first person to congratulate us after Natalia's birth, when so many others couldn't find any words. I remember as I stood sobbing in our doorway, the words Down's syndrome sticking in my throat, the post birth shock of diagnosis still raw in my heart. He simply said she was gorgeous and hugged Bob and I. So it was poignant in itself that he should bring the special delivery.

Once inside, I ripped open the envelope and froze, then squealed at its contents. Then there were some tears, of gratitude and pride, for Mencap had asked me to join them as one of their many guests who play a significant part in the world of Learning Disability, invited to meet Samantha Cameron at a special evening reception. 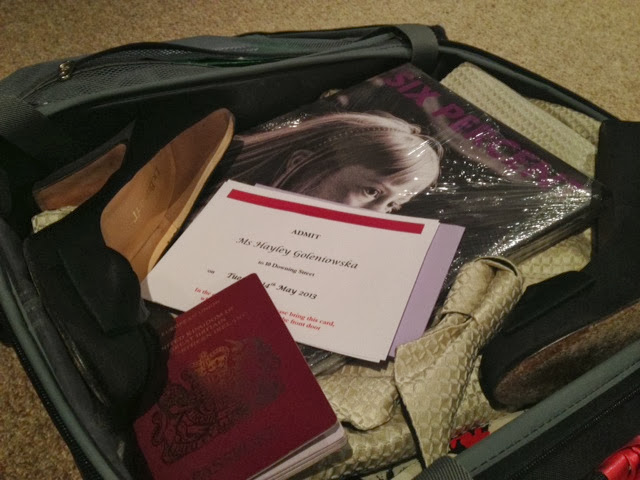 The next few days were filled with finding out who was going and what was expected. I felt a little out of my depth, I mean it's not every day that you get to meet the PM's wife. I Googled 'lounge suit' to try to decide what to wear, before packing my tiny case with some trusty heels and a faithful dress and jacket, my passport (for security purposes) and a 2 copies of Graham Miller's powerful book 6% Down's Syndrome: My Photographs, Their Stories to give to Samantha Cameron and Mencap. I threw in some Rescue Remedy and jelly sweets which I never go anywhere without!

Then to find somewhere to stay and book a train. These events prove costly but I couldn't turn down this once in a lifetime chance. I found a suprisingly inexpensive hotel with a 5* Tripadvisor rating in the area, (there was a reason for it's bargain pricetag that would become all to clear on arrival...) and headed off on the morning train after kissing the girls at the school gates that morning.

I sat, savouring the silence of the quiet carriage, enjoying the enforced break from the internet. I didn't read or write anything (quite novel for me) but sat and let the already tumbling thoughts flow through my consciousness. Would I get a chance to mention the odious Collin Brewer? Would I meet Samantha in person? What would I say in the important 1 minute I might have with her?

I focussed on the fact that she had been the mum of a disabled child who had passed away, the human side of her I could relate to, rather that trying to think about my feelings on her husband's education and benefit policies. This was not the occasion.

I arrived at the seedy rather basic looking hotel and had just enough time to freshen up before heading back out. I guess the CCTV WARNING sign replacing any form of name on its front door might have been a clue. At reception I was handed a red rose by the owner. I'm not sure if I managed to mask my surprise at the misplaced gift but I shrugged it off as a sign that the owners were well meaning if a little outdated.

Up the creaky windy stairs I went. I found my room. A teensy single bed, trailing wires everywhere leading to an old kettle, lamp and tiny TV. Where was the shower? The ensuite loo? Oh. Down a corridor... shared... oh heck.

No matter. I was here for more important things.

The taxi took me right to the high iron gates, manned by 2 guards with machine guns. I'd agreed to meet Caroline Playle outside but felt loitering might not please these chaps, so headed in to security phase 2, which I can only describe as like very very posh airport security. Airport security where they wrap your coat and handbag up first before running it through the scanner in case it gets scratched.
The policemen and women were also fabtastically friendly and chatty and put my mind at ease straight away.

Inside we mingled, chatted with the wonderful Mencap staff and met many of their benefactors. I realised that these incredibly generous people keep such charities afloat, but that they do not necessarily have much of a grounding in Learning Disabilities themselves.

Caroline and I decided to visit the ladies. Along a corridor we went, lined with surprisingly modern art, when suddenly a door opened and out came Samantha and her aide. She was walking right towards us. Caroline and I panicked, trying not to be in her way before we were formally introduced, so we turned sharply into the toilet doorway, acting as casually as we could.

Only the doorway was a closed set of lift doors. We were stuck, casually chatting there as if we had planned it. It was like a scene from a Carry On film. I don't think she noticed though, do you Caroline?

Then the meeting itself. We were introduced in groups and I briefly explained to Sam how Downs Side Up started, the support I wanted to give other families, the shift in thinking we were trying to create and Samantha explained how she felt when Ivan was born. And then she was gone, moved along by her uber-organised aide. I handed over the book as a gift. That was it. The moment had passed but was captured here forever. 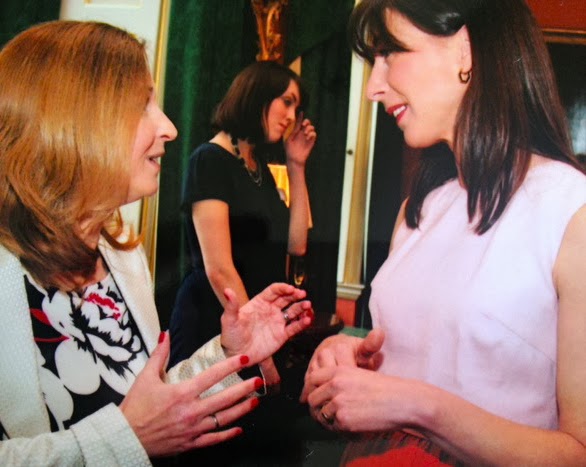 There was no time to stop and think and the rest of the evening was a non-stop whirl of moving speeches and meeting many celebrities. I'm not very good with names and I think this might possibly have been the moment Caroline informed me that the chap in the beanie hat behind me was U2's The Edge. Oh, and that's Lord Saatchi next to him. Yes, of course I stole a kiss from them both. It would have been rude not to.

I've since been given the honour of being asked to work with Lord Saatchi on his Medical Innovation Bill, to free up doctors to work on new cancer treatments without fear of letigation. #SaatchiBill 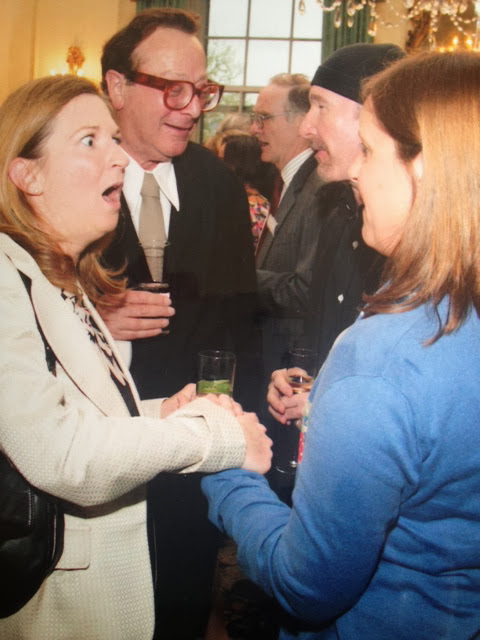 I met Jane Raca, wonderful author of book Standing for James, Jo Whiley, radio 1 DJ and sister of a woman with an LD, Jodie Whittaker from Broadchurch, aunty to a little boy with Down's syndrome and Ciara who works at Mencap and has an LD herself is the Edge's cousin.

Then Kate Spicer, food critic and maker of film Mission to Lars gave a speech about her brother who has fragile X syndrome, his upbringing, society's attitudes and struggles with education. We were moved by her honesty and determination, the passion in her voice and could relate to much of what was said as it is what motivates us all to create change.

We left, past Churchill's old chair and portraits of former Prime Ministers. The history felt like a cloak and regardless of our political feelings, it surrounds us all. Champagne and relief at not having fallen on my face, vomited with nerves or got caught with any accidental embarrassing contraband, led to giggles now and we all posed outside with the very lovely and very obliging young policeman, the snapshot we were refused on the way in. (Sorry I didn't get a photo of those books going in Graham). 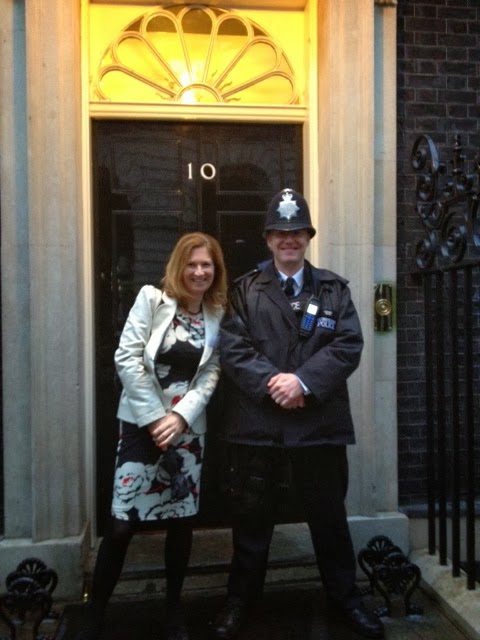 Hugs and farewells and a cab ride back to my fleabitten cosy abode for the night. The taxi driver urged, 'don't go out tonight once I drop you off. It's not a safe area.'

Great. I'd chosen a budget hotel online, but I didn't realise quite how 'budget' it was...

With no food (except the gummi bears) or a restaurant in the hotel. I had no choice but to leave. Running though the dark to a Tesco Express in the rain, suddenly the juxtapostion of where I had been that evening and where I was now hit me hard.

I had left behind one of the proudest nights of my life set in the most splendid historic surroundings. I had met people who I shall be eternally grateful to, those at Mencap and other charities and individuals who fight daily to make this country a better and safer place, to ensure the independence and the voice of our children.  Who fight hate crime on their behalf, who bring our voices to the fore. I felt thankful for living in a country at peace with a safety net for us all that works most of the time.

But when I shut myself into my tiny basic room that night, my heart thumping as I poured boiling water into my pot noodle, I felt vulnerable and alone, nervous. I didn't sleep a wink. Was that flower a sign of something more sinister. Was I safe? Was my room door secure? Would the dodgy electrics catch fire? Would I get out if they did?

My brain wouldn't sleep, as I mulled that even some of the most well-meaning supporters I had rubbed shoulders with that evening still need some education in the true meaning of inclusion, of the value of those with disabilities within our communities.

I felt insignificant and powerless too, for despite my constant churning out of interviews and writings and blog posts on a daily basis, I am just a teensy tooth on a tiny cog in the vast whirring and little-understood machine that is our country. Even the language they spoke was different to mine, their lives a world apart.

"How many adults with learning disabilities go to bed feeling that way each night, I wondered."

And there, in an instant, I stepped into the shoes of the vulnerable.  Misunderstood, easy prey, cast aside, afraid, unsure, needing support.

On the train the next day I sat and wrote notes for this post.

Big fat round salty tears plopped onto the paper in my lap. I couldn't stop them. I couldn't hide them.
They caught me by surprise, I'd had such a wonderful evening after all. I tried to wipe them away but gave up in the end, giving in to their healing properties.
Maybe I was just exhausted by the adrenalin overload, maybe I was missing my gorgeous girls, or maybe I felt overwhelmed by the road we parents and campaigners have yet to travel. Perhaps it all seemed futile.

But as I neared my destination, I resolved to think about the successes, focus on the positives as I always try to do and join forces with those such as I had met the night before to work even harder to melt away the fear that surrounds Down's syndrome and other learning disabilities.
Onward and upward we go.