Star
was one of Natalia Hope's very first words. (Along with 'cake' and 'chocolate' and 'more'!)
And her name means 'birth', a December-born baby who was allowed home from hospital on Christmas Eve. The greatest gift ever imaginable.

Our little star
loves this time of year, the lights, the twinkling, the craft activities, the gifts, the sing-along DVDs, the family and friends. She'd happily let the festivities carry on all year if she could. I wonder if you know anyone like that...?

There's so much to do, see and take part in, a veritable sensory learning paradise for many children. Of course one of the most anticipated dates in the calendar is the school play or concert, and this year Natty's class are staging a classic Nativity. Last year it was The 3 Little Penguins and Natty nose-picked, danced and grinned her way through the performance, just as her peers did, literally dressed as a star.

Last week I opened Natty's book bag and removed a slip of paper. I think it read along the lines of:

Your child, Natty
will be performing in the Christmas Nativity play
as Mary. 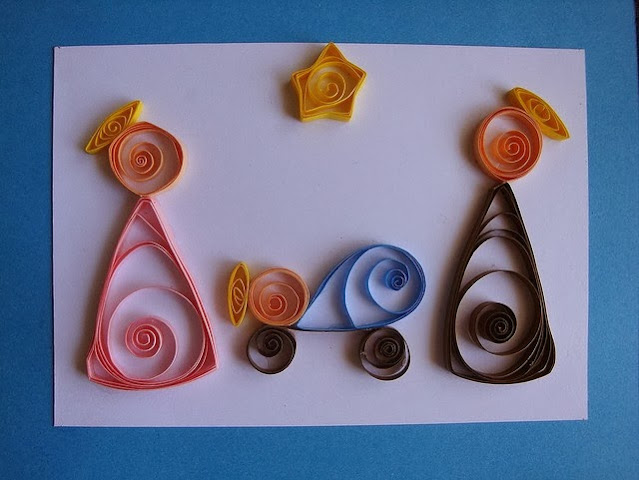 At least I think that's what it said because I didn't read past the word Mary. Tears welled up in my eyes. Daddy Downs Side Up complained of dust in his eyes too. We hugged our little star and signed 'proud' through our smiles and tears and whoops of excitement.

Now everyone I have told about this says, 'Ahh how lovely.' Or, 'Oh she'll love that!' Or, 'You must be so proud'. I bet your first reaction was just that too was't it?

The day she arrived in our lives I foolishly feared we would never step out in public again. Then there were our worries over whether she would survive heart surgery. I was afraid to love her unconditionally in case she didn't make it and it would hurt too much if I had taken that leap. We had no idea of what lay ahead, but we vowed to take one step at a time and always follow Natty's lead in what was best for her with regard to schooling and interests.

So to hold a piece of paper in my shaking hands saying that she had been asked to play the central role in the (mainstream) school production was beyond wonderful, beyond our wildest dreams. This year Natty would be the star alongside her 'typically developing' classmates. My heart was bursting out of my chest with pride.

The part is made for Natty I must say, she gets to stand centre stage, she'll think all the applause is for her, Mary isn't a big speaking role, just a couple of precious lines that we have practised so hard that she is shouting them in her sleep, and she gets to hold a much-cherished doll throughout.

(I just hope she doesn't have a grumpy moment as she did when she played a sheep 2 years ago...)

So why then are the tears of pride stinging?

Why are our hearts alternately singing and weighing heavy? Why do I want to add a 'but...' to your ooooohs and aaaaaahs? Why am I a little nervous of the event, fearing making an emotional fool of myself?

Because seeing Natty up there on stage, playing the most famous and gentle mother of all mothers, the Virgin Mary, lovingly holding the symbolic baby Jesus in her arms will be a very powerful and graphic reminder that our youngest daughter is unlikely to ever become a mother herself. Even if she was physically able, it wouldn't be in her best interests emotionally, for becoming independent and able to look after herself with support is our best aim.

The day she was born I sobbed over this fact. I grieved the loss of the Grandchildren I assumed she would bring to our family. It came from some primeval place deep within my soul, a place that the head cannot rule over however logically you try to reason it out. I thought I had come to terms with the fact over the years, I can watch Natty play with dolls now without her words 'Look at my baby', sending me rushing for my sunglasses. But I realise, sitting here with tear-stained cheeks after driving home from school releasing chest-deep sobs alone in the car, that I am far, far from that place.

Now, Natty's fairy Godmothers don't have any children. Her Great Cousin doesn't have any offspring. One of my dearest former colleagues cannot bear the thought of reproducing.
But for all of them it was a lifestyle choice, a decision that they made.

My oldest chum and her partner were unable to conceive and have just adopted a gorgeous little boy after years of heartache. Having children isn't the be all and end all in life, but if you want them and are denied that privilege it takes a lot of soul searching to come to terms with that fact. It's a loss, an empty void, that is hard to fill.

And one day we will have to have that heart-breaking conversation with Natty, who may or may not understand the whys and wherefores.
We will have to explain to a young woman who loves babies, that she cannot become a mother, as her elder sister is likely to.
I hope the realisation doesn't crush her.


Perhaps she will fill her life in other ways, get a job in a childcare capacity, or maybe it will never cross her mind to be a mother and I am overthinking the whole thing. It's all a long way off and I don't know any of the answers yet. I don't even know what all the questions are. I will look to the families I know and respect who have led the way for advice and support.

I do know we will have to turn being an aunty (which she and Mia are already) into an important and valued starring role, just as we view motherhood.

So if you see me sobbing in a village hall at 6pm tomorrow evening, please excuse me. You now know it's not because I am over proud or pathetically pushy or super soppy.
You'll know it's because I am taking in and assimilating all of Natalia's unique star qualities.


See the photos taken during the nativity performance here.
It was 'alright on the night' as they say.