Natty, who has Down's syndrome, in Sainsbury's back to school campaign

As I sat in my kitchen last Monday afternoon plying a journalist and two photographers with cream teas while they jigsawed their pieces together to meet the Telegraph deadline, I realised with mixed emotions, that the world still finds a little girl with Down's syndrome appearing in a major advertising campaign news.

Mixed emotions, because we wouldn't shout about how exciting it is that a company are featuring children of different ethnic backgrounds would we? I actually said as much to the journalist that broke the story in the Mail earlier in the week. Natty has been modelling for three years and there have been other pioneering campaigns such as Seb White in M and S, and a little girl with cerebral palsy in Boden. Surely we've broken down the barriers already?

On the other hand, Sainsbury's is the first large retailer to feature a Back To School campaign which is so inclusive. The very campaign that is targeted directly at all children. So YES, it is a big deal that all children can see themselves represented in it, whatever their abilities.

So, the Daily Mail, Sky News, the Telegraph, Now Magazine and many more media outlets around the world such as Italy's Mondo and Australia's Syndney Times, have spread the word that we are all more alike than unalike this week, that Natty is just a little girl like any other, not a set of symptoms or a diagnosis nor predictions for her future. Even Loose Women picked up an article and discussed #adinclusion on air. Sometimes they got their terminology wrong, but the message was powerful: Down's syndrome is not to be feared. You can watch the Loose Women clip here: 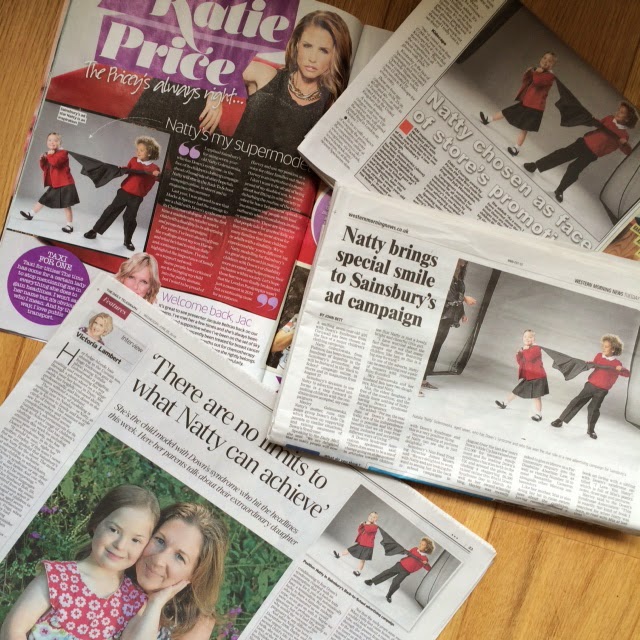 Thank you Britmums for holding the fort for me, and writing a little summary while I was too busy and strung out on adrenaline to touch my blog. It really felt as if I had a safety net of support around me at a time when I felt vulnerable.

My inbox has been full of heartfelt and emotional messages from new parents, for actually a story like this is a shining beacon of hope to many. If ever you think that your campaigning is being sent out  into a void (as I have on occasion) it is encouraging to know that what you are doing is making a difference. And when the Telegraph piece was published, a piece of journalism based on truth and integrity, these are the kinds of messages I received.


"You taught me to genuinely believe that actually all is ok!
Life is very different, but that doesn't have to mean worse. You have inspired me to know that in the blackest, most terrible of times,
the future can be amazing. "

"But I just wanted to say, thank you, thank you, thank you!
You and Natty as well as Mia and Bob of course have helped me through the darkest days and when I've taken to the silly internet, you've been that constant light that has shone through everything else.
I don't know you but you've helped more than you'll ever, ever know.  Love and deepest respect always."

'Hi Hayley, this it Tom from ITV,
could we chat about you and Natty coming on the Lorraine show.'

BBC Breakfast wrote a similar heart-stopping request, but Lorraine is more chatty, approachable and reaches new mums at 8.30am when the rest of us are on the school run. So, after some deliberation, we went with the lorraine Show.

Was I up to the job? Had I bitten off more than I could chew? Would Natty behave on live TV? Would we get a chance to get a deeper message across? Did I have the energy for another trip to London post BritMums Live?

You can read the Telegraph article 'There are No Limits to What Natty Can Achieve' here.