Our trip to Buckingham Palace was incredible, a massive honour. The garden party was a surreal experience that is tricky to put into words. But I'll have a go...

After our drive to London from Cornwall, there was little time for preening and bouffing and attaching feathers in our hair and fiddling around with those weird tights without toes that you wear with open-toed shoes to make sure you couldn't see the seam and flapping about having all the correct forms of ID and the right invite (not the posh keepsake one, but the orange paper one that actually admits one to the Palace).

Oh no, wait. That was just me.

Bob sat watching repeats of Top Gear and laughing loudly, giving me an unwanted automotive running commentary, in between giving me time checks and saying helpful things like, 'Just brush your hair and stick the fascinator on', while I got hotter and hotter and more panicky about the 'hairdo'. I think it took him all of three minutes to throw on a sharp suit and tuck a colour-co-ordinated hankie in his pocket.

We jumped in a cab from our hotel and headed for the Palace. We had plenty of time before the gates opened at 3pm. Or did we? Central London was total gridlock. We passed a car on its roof and goodness knows where everyone else was heading, but we were stuck in solid traffic.
Hotter and hotter I became, under my trusty little dress and cashmere cardi, that had also seen No.10 Downing Street. I checked in the mirror to make sure a shiny nose wasn't scuppering the rushed make-up efforts.
I calmed my nerves with an 'obligatory blogger selfie', while Bob frantically checked his phone for alternative routes through the city. Time was ticking, and I wasn't sure if lateness counted as treason amongst the Monarchy.

Never fear, once we arrived, at around 3.15, we immediately saw the long queues of hat-clad quests being admitted through the gates of the palace grounds. Everyone looked amazing, and I was put in mind of guests at a very large wedding in the loveliest setting imaginable.

We were lucky enough to be introduced to Prince Edward. We chatted to him about Downs Side Up, supporting new parents, about the research that project Millie Moreorless is doing into maths for children with Down's syndrome at Bath University, about Natalia modelling for Sainsbury's, about the work of the Down's Syndrome Association and also Mencap, for whom his wife Sophie Wessex is a patron. I told him that we are all different and we all need help with things from time to time, and he agreed.

He was genuine, interested and took a great deal of time to listen to us.

Later we stood in line as the Queen and Prince Phillip, Prince Charles and Camilla, Prince Edward and Sophie Wessex walked past. And a strange feeling washed over me. One of a sense of history, of traditions unchanged, of witnessing something very rare. The Queen was petite and beautifully dressed in lemon. Sophie was the very epitome of chic.

So, what of the tea party itself? What of the inner sanctum?

Well, I could bore you all day, so, with fellow bloggers Tania at Mummy Barrow, Sarah at Grenglish and Laura and Amy of Making a Baby Adventure all heading off to eat cucumber and mint sandwiches without crusts this month, here is a list of what to expect/do at a Royal Garden Party at Buckingham Palace:

If only our girls had been there

And all through the event, I kept thinking of our girls, the motivation for all we do. The reason for working for change and for acceptance and support, for inclusion and belief. And a lump sat in my throat as I thought that they were the ones who deserved to be there, our girls who have made us better people who have taught us so very much. What is Downs Side Up without them?

No-one under 18 is ever invited of course, but I found myself daring to dream that one day, in the distant future perhaps they will be the ones to be invited. That Natty will stand and tell a Prince or a Princess what inclusion means from her perspective, and Mia will explain that having a sister with Down's syndrome is pretty much like any other kind of sister.

And for now, I was proud and happy that I had stood in that special garden and talked to a member of the monarchy on a subject that they probably rarely consider. 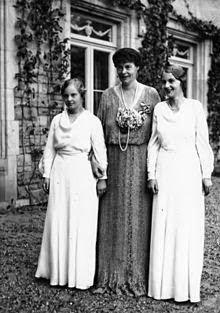