We are enormously proud, excited and honoured to announce that our girls Mia and Natty have been selected to receive a British Citizen Youth Award. 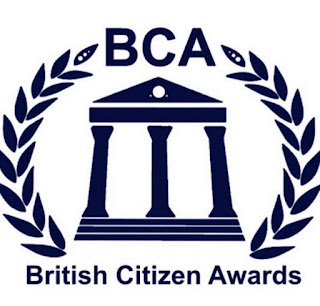 We heard a couple of weeks ago (there were many tears and squeals) but the news has been under embargo until now. I think Grandma almost burst trying to keep it to herself, but well done for managing it Pearl!


The girls were nominated by Learning Disability Nurse Helen Laverty and myself because it means so very much to us to be able to show the girls how proud we are of all the work they do.

Downs Side Up has become an integral part of their lives and has been for as long as they can remember. Whether doing talks in school assembly about inclusion, or at conferences to student nurses, writing a book for other children, being ambassadors for Mencap, being a role model by appearing in advertising campaigns or appearing in documentaries and the media, both girls are quite unaware of the positive impact they have on others, just by being themselves.

So many families write to tell me how much seeing Mia and Natty in their live broadcasts on Facebook called Chatty Natty encourages their little ones, or gives hope to new parents at the start of an uncertain journey following hearing the news that their bay has Down's syndrome.

But more than their very public achievements, I am so very proud of both girls for being the kind, fair individuals they are. Mia very much looks after her little sister, even at the age of 2 she helped tube feed her and later became a mini speech and language therapist.  She has a keen sense of right and wrong, a positive outlook on life and always looks out for others.

Natty is always bright, funny and uplifting and has an innate sense when someone needs a boost. She sees no limits and works hard to achieve everything she wants to in life as well as breaking down the barriers that exist in others' minds when it comes to disability.

Of course the girls are like any other siblings though. They squabble, are competitive and defensive of each other in equal measure. They may be Down's syndrome ambassadors, but they are also like any other child.

So the girls will receive a specially minted medal alongside a group of other incredible young people, inscribed with the words 'For the Good of the Country' which will be presented at a ceremony at Westminster Palace next month by the inspiring Ashley Banjo from dance group Diversity. The young people willalso be encouraged to use the letters BCyA after their names. We are all so excited about meeting everyone and learning about their stories.

Each recipient at the formal presentation is being recognised for making a positive contribution to their community, society in general or a their chosen cause, and they will come from all over the country and represent multi-cultural Britain. What they each have in common is a comittment to improving the lives of others. I am packing tissues because I know it will be a very emotional, overwhelming and inspiring day.

The BCyA programme, in association with Specsavers, seeks to encourage others to look after those around them and foster a culture of doing good deeds. At a time when young people can so often be portrayed negatively in the media, it's wonderful to see a scheme that celebrates how extraordinary and wonderful they are and recognises that our future is in their hands. Thank you so very much for considering Mia and Natty in this light.


So, now that I've spilt the beans, I'll return to my smart-outfit-organising panic...


*If you know an extraordinary young person that has positively impacted your community, you can request a nomination form here:  jacquif@britishcitizenawards.co.uk