I was recently asked to address a group of SENCOs (Special Educational Needs Co-ordinators) as they neared the end of their 3 year Masters Degree Course. Their tutor hoped I could provide the missing ingredient to the course: that of the Parents’ Perspective.

I put my thinking cap on and set to work to come  up with something that would change the way new SENCOs think forever.

I decided to ask other parents and disability groups what they would say to a room full of SENCOs if they had the opportunity. I did this via Twitter and Facebook, and the response was overwhelming. I printed the replies off, cut them up and spread them on the kitchen table. Interestingly they fell into 3 distinct categories, and echoed my own initial plans for the talk.  I weave the quotes from these parents into what follows.  Thank you to all of you that helped.

This article has since been published in SEN Magazine.

I am a former language teacher and learning support assistant and am now a stay at home mother of two. Our youngest, Natty, has Down's Syndrome.
When I looked back from the parental side of the fence, on my time as an LSA, I realised that I may have been good, but that I was not quite good enough. So I decided to ask other parents and disability groups what they thought of the professionals who support their children; what they would say to a room full of SENCOs and SEN workers, if they had the opportunity. The reaction to this was overwhelming and the responses fell into 3 distinct categories, which echoed my own thoughts.

By far and away the most frequently mentioned and passionately   discussed point was that professionals must consider what parents think and want.  All families differ, some need more support than others, but the vast majority know their child better than anyone else.  After all, it is the parents who have sat up into the wee small hours researching their child's condition online, fuelled by worry, fear of the future and a desperate need to know that they are doing the very best they can.
It is they who have been the experts from day one. It is vital to involve and accept help from parents. SENCOs who recognise this have the most valuable resource at their finger tips.

"Realise that the parents are experts and be open to suggestions of new ways of doing things that have been successful elsewhere."

"I would like to be treated as the lead professional."

"I would ask the SENCOs to take 5 minutes to listen to the parents (very different from talking). I may not have any O Levels, but I want my child to go through school in the best way possible. This means being regularly involved in planning and forward thinking."

It is so important to see things from the parents' perspective sometimesand understand the pressure they can sometimes be under.  They live with the child's difficulties every day, they may not get much sleep, might have been through worrying episodes when their child was ill, hopitalised or undergoing surgery. At times this will take it's toll, and recognising this will go towards creating a better working relationship.

Teachers and SENCOs should take the time to look for potential problems within school, so that the parents don't always have to be the ones to mention what is not going to plan. Suggestions should be taken seriously the first time because as one father mentioned;

"By the time I raise an issue at school, it is because it is really important and because I have already let a lot slide. I will have been mulling it over for a very long time."

"For inclusion to be successful, a teacher must provide for the needs of every child in the class and this includes children who have teaching assistants (TAs)." says SENCO trainer Angela Redman. "The teacher should work individually with these children so that they can fully understand them. Pupils will often work harder for the teacher and this also models how the other pupils in the class view that child."

Most parents realise that the role of a SENCO is a difficult one. They are employed by the school, report to a head of department and headteacher, and work within ever increasing time and financial restraints.  Primarily though, they work for certain children within that school, often some of the most vulnerable, and they are their advocates.

"Sadly, a SENCO's role is to run with the fox and bark with the hounds."

"First and foremost they should be an objective advocate for our children."

"As an ITU nurse, I attended a Critical Care conference each year, listening to survivors of disasters, so that we culd understand the trauma whn patients came in to us.
At the end of the day, I was the patient's advocate first and foremost as they are always the most vulnerable person in the room. It was my priviledge to keep that patient safe in every conceivable way at all times. I always considered them with the highest possible regard and if I had to lose my job to whistle blow I would.
To me, anyone involved in SEN should be the same."

Sadly bullying and disrespect towards SEN pupils can and does occur within schools and sometimes staff members are the perpetrators.  This could be a peripatetic teacher, a dinner lady or receptionist whose ideas are a little 'old school', so you need to be vigilant.  All staff need to be made aware of the school's Disability Equality Policy, and trained to follow it.

"Make sure all staff know that just because a child has additional needs does not mean they are a problem, just that you need to think differently and change your way of working."

SENCOs need to get out into the classroom and go on learning walks around the school. They need to spend time with the children with SEN, to assess needs and determine which advice servises and interventions to recommend.

One TA I have worked with summed up the SENCO role rather well: "An efficient SENCO would have the ability to promote effective teamwork. They should be aware of their team's individual expertise and have in place methods to deploy them across the school, ensuring teachers, teaching assistants, supervisory staff and parents have access to a higher level of support, and providing service users with a flexible, efficient and competent workforce. This dynamic approach to teamwork allows for the identification of gaps in provision and highlights areas for professional development."

We all know that school is not just about Reading, Writing and Numeracy, but sometimes it is easy to become lost in academic targets and assessment.  For SEN children, their time at school is  more about the long-term goal of enabling them to live in mainstream communities as independently as possible.

"A good SENCO will see this bigger picture and help their staff see it too."

"Our daughter will not finish school and live in a vaccuum. Our hopes should be that we can all enable her to live within the mainstream community. And for this, her experience at mainstream school is crucial. Inclusion at school will help her be included in her future, will help others learn to include her. Schools should see themselves as mini societies, enabling children to become good citizens.'

Another parent's comment encapsulates a common concern:
"Some teachers are used to measuring success in data and feel 'what's the point in helping this child who is so far behind?' They become frustrated that they aren't making more progress. They need to see that reaching small goals are worth such a lot, that they are helping a child to live an independent life."

Inclusion is a two-way street. Classmates learn as much from our children as our children benefit from being included alongside them.  I recently wrote a post about true inclusion as I witnessed it at a 5 year old's birthday party:
Inclusion: The Significance of the Birthday Party Invite

SENCOs have a difficult role, but they are in a priviledged position: they can make an enormous difference to the educational careers and future lives of so many. It is important that they get it right for our children. 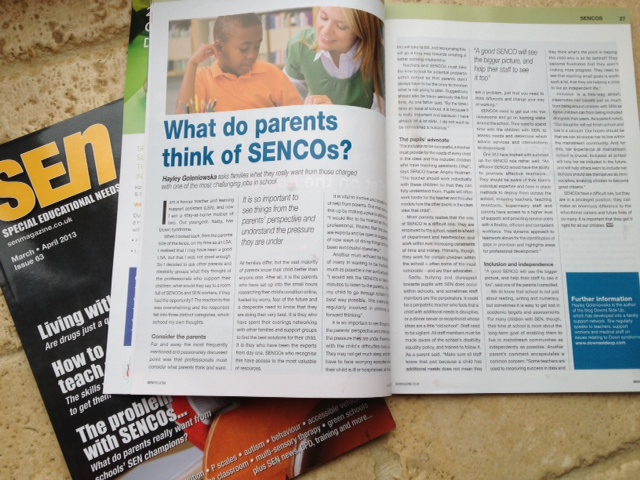