I was honoured and proud to be asked to present the closing keynote speech at the annual conference of The British Institute of Learning Disabilities (BILD).
This organisation has been around for 40 years, with a well-respected research base and vast experience in consultancy and an advisory capacity as well as providing evidence in legal cases. They really ought to be a household name in my opinion. And they  are such lovely people too!

I knew the delegates would include care providers, social workers, parents, medical professionals and adults with learning disabilities, so writing my piece became quite a task. Fighting a cold, I sat up til 1am on many consecutive nights, weighing up what to say to make the biggest impact, cover all bases, be the voice of other parents.

Off I set, swapping wellies for heels, my uniform of jeans for a more credible dress, and leaving my Mummy brain behind, hoping to learn as much from others as I hoped to impart myself. I missed my girls before I had even walked out of the front door. But deep down there was a little secret part of me that was very very excited about the prosect of 2 full nights' undisturbed sleep!

On arrival at the designated hotel after a 6 hour journey, (including a car journey with Keith from BILD, during which I felt like my brain was a sponge, soaking up his experience and immense knowledge of all matters Learning Disability) I hooked up with the fabulous BILD team for dinner. While everyone was immediately welcoming and friendly, 2 faces stood out for me....

Peter and Lloyd (pictured below) swooped forward, shook my hand and impressed me with tales of acting in Great Expectations and East Enders, Speaking for Mencap, training medical professionals and organising the Special Olympics, as well as setting up the nationwide Changing Places scheme providing disability friendly toilet facilities. These trailblaizers both insisted that I sit next to them over dinner. My nerves were gone. Peter and Lloyd had intuitively sensed my vulnerability that evening and chatted easily to make me feel at home.

Peter and Lloyd (pictured below) both happen to have learning disabilities.

During the meal Lloyd made my sides ache with his witty one-liners and perfect comedy timing, oh, and his unparalleled ability to eat a goldfish tank-sized bowl of ice-cream and chocolate brownies without drawing breath! Peter made us all smile when he took a nifty detour on his way back from the gents' to join an award ceremony taking place in another room 'because it looked like fun'. Frankly, we could all do with taking a leaf out of Peter's book, and being a little more spontaneous in our lives, stopping to enjoy the nicer things that catch our eye, living in the moment.

All at once I realised that I, disability campaigner and author of Downs Side Up, did not yet lead the inclusive life I strive for. Sadly I was denied the friendship of anyone who was slightly different to me when I was growing up, by a society who prefered to ignore their existence. Unlike Natty's generation who gain as much from her being amongst them as she learns from being included by others, I had missed out on a wonderful alternative perspective on life that friendships with those who are 'differently-abled' brings.

If I had been brought up in this way, I am certain that Natty's birth would not have caused the ripples it did. Instead of that extra little chomosome being weighed down by the stigma it was piggy-backing, it would have been crystal clear in its transparency, unshrouded by dark, unspoken mystique. My fear and shock would never have had a chance to take hold.

I also met Jim Blair that evening, a consultant learning disability nurse at St George's Hospital. A man whose job it is to help patients with learning disabilities by explaining illnesses, procedures and medication by using pictures, easy to understand vocabulary, patient passports and other means. Jim is, quite simply, one of those professionals that needs cloning and putting into every hospital in the world.

I immediately wanted to rewrite my entire presentation that I had planned for the next afternoon. But it was late, and my head had yet to formulate exactly what it was that I was feeling, exactly how I would change it anyway...


The day of the conference dawned

I didn't feel like much breakfast.
In knew the topic of the first sessions of the morning were going to be difficult to listen to as a parent. They were centred around a review of the Winterbourne View case (Winterbourne was a 'hospital' in which staff were secretly filmed abusing patients by Panorama). I am not naiive, we all know that abuse has and does happen and that is our job to whistleblow, and that organisations such as BILD pick up the pieces, but I was not prepared for how these sessions would make me feel.

As I sat in the front row and listened to the overwhelmingly positive review of investigations, steps and measures to close care facilities that are not up to scratch, standards set for care workers to adhere to my eyes began to prick. I wiped away a couple of tears. But the more I listened, the deeper the shameful travesty of the abuse and neglect became.

I thought of the times that people have said how lucky Natty is to have a family like us.
No.

We are just an ordinary family with all our failings. Natty is more lucky to have been born into the 21st century within a reasonably enlightened society. Elsewhere in the world or at another point in history and her fate would have been very different. The tears then couldn't be stemmed. I let them wash down my face and fall into my lap, thinking of all the other children like Natty, the forgotten adults denied education or healthcare, shunned, ignored, feared, not allowed the social stimulation they thrive on.

The speakers voice again cut through my thoughts and I realised in a heartbeat how grateful I was for the professional angels who swoop in at the darkest of moments in all our lives. The doctors and learning disability nurses, the surgeons, the support groups and charities like BILD, the researchers and Quality Care Controllers. These are the people who make it their life's work to do their best to stop things going bady wrong, and none of us knows when we will need them. Then the tears became those of relief and thanks.

Suitably refreshed I sat down again to support Peter, Lloyd, Jim Blair and a precious Mum called Pauline talk about how simple 'reasonable adjustments' in hospital settings can not only make a patient's stay more pleasant, but are actually a requirement in order to save lives, as the Death by Indifference campaign by Mencap set out. I described Pauline later as 'the most amazing' woman, a term I use reservedly as anyone who knows me will attest. She is the most gentle, proud, positive and encouraging person and she has come so very far since the day 31 years ago, as a newly married young woman in her early twenties, she thought the term for her baby was a 'mongrel' as the phrase widely used then was, indeed 'mongol'. This year she watched her son David proudly carry the Paralympic Flame, having been chosen for his many life achievements.

Then Jim Blair put on a short film about Peter. Again an amazing tale of the power of the invisible safety net around us all. But what I didn't know was that Peter had been badly injured in an unprovoked attack last year. I wasn't prepared for that. Please watch Peter's 2 minute film here When the presentation was finished I flew to his side and hugged him. 'That shouldn't have happened to you. I'm so sorry.' I shook with anger.
Peter had been glassed in the face one afternoon.

The day could not get any more emotional could it? But there was yet much more to learn. I decided to pass on the amazing  interactive workshops after lunch. I had heard so much about and needed to meet Kate, and the day was slipping away fast.

Kate is another incredible and inspirational woman. An attractive lady in her twenties, wearing a trouser suit and fashionable bobbed haircut, she works at BILD, lives independently with support, has a full social life, her own home and a mortgage. Kate has Down's Syndrome. If Natty can achieve what Kate has achieved I will be one very proud Mummy. Kate told me that her Mum was very nervous when she moved out of the family home, but that she was fine. I guess we Mums do fuss too much sometimes don't we!

The next hour was spent getting increasingly nervous about my presentation whilst mingling with organisers of support groups, care givers and publishers of specialist resources. Again the wealth of expertise, experience and massive support we all have for one another was vast. We are all louder if our voices are heard in unison after all.
I believe there is no place for individuals who have their own agendas in this world of support, charity and campaign for change, although I am sure they exist. 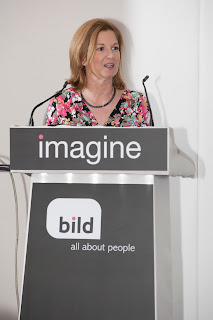 And so, with this emotional build-up as background, Downs Side Up took to the podium.

My story felt fluffy in comparison to what had gone before, like the story of a fire crew rescuing a fluffy kitten at the end of a distressing news bulletin. My unremarkable story of how we struggled to come to terms with Natty's extra chromosome in the early days, our shock and fear, in part, enhanced by the negative language used by the health professionals, their 'sorries' and their tears.
Of the genesis of Downs Side Up as a blog and a wider support network. The story of Natty becoming one of the UKs first clothing models with a disability. But then I realised that by changing attitudes one by one, making small inroads, knocking down walls, opening doors we were creating implications for the wider picture. For perhaps

"gently changing perceptions of Down's Syndrome
from with hearts"
was not only going to prevent other parents from feeling the desperation I, and my husband to a lesser extent, sadly experienced in the early days, and enable them to enjoy all those precious first moments with their newborn. But just perhaps my writing was going to have wider consequences than I imagined. Perhaps it would play its part in preventing future hate crime and abuse, by shining a light brightly into those shadows of ignorance.

I cannot go back and change the start of my journey as Natty's Mum, nor can I change what has happened in our society's history, but I can join forces with the teams of incredible people who are doing something about BILDing a very different future for those with learning disabilities.

That takes Innovation, Inspiration and Imagination.