Shortlisted in Brilliance in Blogging Awards 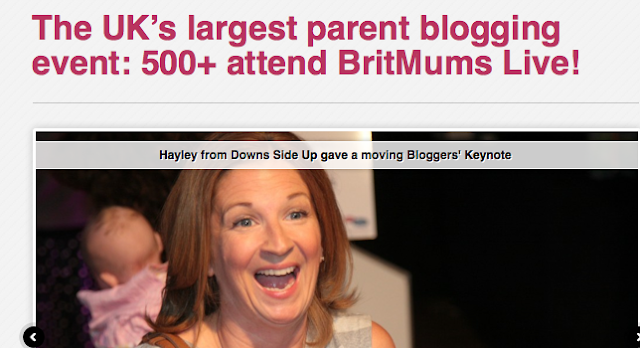 Last year I fell off my stool and jumped around the kitchen when I heard I had been nominated in the Inspire category of the BiBs Awards run by the wonderful Britmums.

This year I was nervous. Would people still find Downs Side Up inspiring now that we weren't a new blog on the block? Had I outstayed my welcome. There are many other fabulous Down's Syndrome blogs to choose from too now after all.

The shorlists were announced yesterday evening and the voting for the finals opened, and I was truly flabberghasted to have been listed, alongside many of my gurus and inspirations. Not just in one category, but 3!!!

Inspire - The content, the voice, the infectious enthusiasm of these bloggers encourages everyone around them. They are seen as leaders in their field and their inspiration is felt through the community.

Commentary - A blog is a bully pulpit and a place to highlight causes, raising awareness and funds, and being a force for positive change. Their topics might be global, local or personal. Whatever their cause, these bloggers did more than their bit, and helped us get involved too.

Outstanding - This blog grabs your attention and won’t let go. It looks good, it reads good, and the author is an active player in the social world.

Well, a glass of Prosecco was consumed in celebration.

How do I feel? Proud, humbled, mostly honoured to be among so many greats and really excited about meeting up with them all in London in June.

Thank you to everyone who reads my blog and enjoys it or finds it supportive. I would love you to pop over to the Britmums site and vote for us. It only takes a second to do and will help gently change perceptions of Down's Syndrome from within a few more hearts.

If you'd like to know what Downs Side Up has achieved this year, have a quick browse through the following. It's been a roller coaster, fly-by-the-seat-of-your-pants kind of year I can tell you.


Now first of all I'd like to say that what I do, the Downs Side Up stuff, is not for any recognition or reward or payment. Basically I saw that the World was fearful of Down's Syndrome, so I began trying to change the World for my daughter and other families, so that they can have the best possible life. I also didn't want any other parents to feel as desperate as I did in the early days, purely out of ignorance and my own fear, so to them I offer tips, advice and hope.
Of course, the blog was how it all began. Downs Side Up is 16 months old now but the blog has long since become the hub of a large wheel of activity. I don't want to bore you, and even I find it hard to remember it all, so here's a list of some of the things I've done this year, in no particular order;
Well, you get the idea.
But to have that recognised is... well, I am very proud and it means that my efforts are having an effect.
Downs Side Up now takes up as much time as a full time job, mostly late into the night and when the children are at school. We live in Cornwall, so all that toing and froing to London is a bit of a pain, and we are often out of pocket. I sometimes have to turn things down because I can't fit it all in. We've even talked about moving to enable me to further my work.
I feel I have a duty to carry on, because I can.


And people seem to like listening and reading, so that's a bonus :)
The message is spreading that our children are a wonderful enhancement in life. So essentially all the late nights are worth it. So I'll carry on if you don't mind...
Thank you to everyone who nominated me for this award. I already feel like a winner and am in extraordinary company. I think all finalists should all just have a group hug on the night and a glass of prosecco. And thank you to everyone who has lifted me, inspired me and encouraged me. Those who have helped me through the scary moments when the trolls said unspeakable things about our precious daughter and I nearly gave up through fear. Those who helped spread the word, those who demanded I continue to shine a light into the darkest of shadows.

Thank you too to Britmums who first gave me that chance to find my voice, to Kateonthinice and MarisWorld, Susanna and Jennifer who have taught me so very much along the way.

Thank you. Thank you all.


You can vote here.