I am always honoured and humbled that people like to read my rambling, emotional outpourings, tips and tricks. That they sweetly support my forays into nakedness, public speaking or whatever the latest media plan is.

I am reduced to tears at least weekly by readers' stories both positive and sad, and made to smile daily by the photos they send me of their wonderful children.

I am very proud to have been nominated in the Best Family Blog and Best Blog categories in this year's Mum and Dad Bloggers MADS by Parentdish. The blog gets neglected sometimes because other things take over, but I try my darnedest. Downs Side Up really has become a full time unpaid job so thank you.

THEN I was bowled over to hear that I had been nominated as a blogger who had made an outstanding contribution. Gosh.

I always consider myself to be a 'rubbish' blogger.
To be honest I didn't know what a blog was when I started Downs Side Up just over a year ago and so I had no bench mark, nothing to compare myself to. I honestly didn't know what I was trying to be, so I just became what I had wanted to see and read when Natty was born. That has always been my only motive.
I found that putting on blinkers (ie not reading other similar blogs) was the only way to find my own voice, say my own thing in my own way, and this often leads me to not read or comment on others' blogs as often as I should. I hope they forgive me, although I'm getting better now that I've discovered Bloglovin'.

I probably work in a slightly artistic way: late into the night, I'm fluffy about deadlines and rather disorganised in my email inbox. I work from the heart, the gut feeling, the muse, the tiniest of motivations, a heart-stopping photo. I actually enjoy talking to people on Twitter, possibly a bit too much, but never for gain of followers.
I might promise you an article, and it'll be great, but you might have to remind me to finish it. You might ask me to review a product. I'll turn you down unless I think my readers would actually like it. Money doesn't ever feature for me, although it might make me remember to write your article ;) And actually, when one spends 10 hours a day on one's blog, a little recompense, just to cover one's costs might be prudent in the long run.
But as my blogging journey progressed, I got distracted. Writing sweet, inspirational, informative, powerful blog posts became the skeleton upon which speaking to doctors, teachers, students, parents, training, campaigning in parliament, taking ones clothes off for charity and to celebrate mummy bodies and pushing companies to include models with disabilities became the flesh. Parents told me I was changing their lives and that became the focus.
I have always counted this as being part of blogging properly. I mean blogging is always at the core of something more, right? But still I am a novice blogger. My site is not glossy and I still think SEO is someone in charge of a large company.
Then, along came the awards ceremonies, well the first of the year, the MADS. I was nominated in the MADS and BRITS last year which is a wonderful boost for any writer. Lots of my favourite bloggers won these awards, others I didn't know before are now an inspiration to me. I went to Brits Live and came back a better blogger and a bit less scared of London. Read Thank You for Having Me here.
But far too distracted by sitting throught the night researching disability abortion law before facing a panel of MPs to read the MADS page I assumed 'nominations' meant just that, and that voting would come later. I sat and proudly smiled at being nominated.... and missed the voting boat.
Should I have been filling my blog with requests for them? I didn't. I actually don't like touting, but I might have asked my Mum and friends to put in a word, you know, to save face :)
@HerMelness recently wrote The Mad World of Blogging Awards, a post about how important it is to celebrate what you have achieved outside of and in addition to these official awards. I won't lie, it would have been nice to go through to the shortlist, to further spread our word and awareness of DS, but I will focus on other personal achievements. Thank you Mel for keeping us on the straight and narrow in Blogland.
Then, suddenly, I heard that there was a new category for the blogger who has made an outstanding contribution and that I had been nominated by parenting expert Sue Atkins. (I've since learnt others have nominated DSU too). I was utterly overwhelmed and very emotional. I am so very very proud to be considered in that light and yes, you can vote (it's confusingly called nominating) and yes, I will put the link here, if only to show you I am not a rubbish, disorganised blogger all the time ;)

Since writing this post I was honoured to be selected as 1 of 10 finalists in the Outstanding Contribution category. Here's my reaction to that news and a summary of what I've been up to this year on Downs Side Up.

I find this kind of blog post difficult to write.
It's sort of embarrassing and I can certainly think of a couple of others who should be standing where I am now, some bloggers I nominated myself in fact. 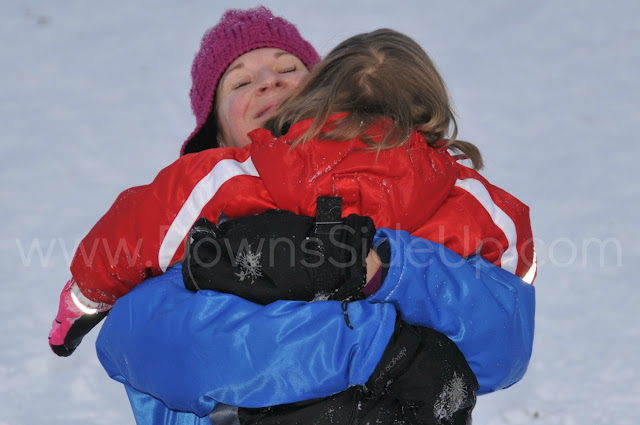 But I am so very enormously proud to have been shortlisted as a finalist in the MAD (Mums and Dads) Blog Awards. The email came through on Mother's Day, which had been a bit different as my husband was working away. As I sat alone in the kitchen after the girls had gone to bed, I read and the tears began.


I rang my mum who was immensely proud. Then I went back to read the email again, just to be sure.


Yes, I had been shortlisted as one of 10 finalists in the surprise category that had been opened after the voting (or nominating as they call it, which confused silly old me, and led me not to ask even my family to vote for me, oooops). This category was called Blogger who has made an Outstanding Contribution.


I can't even write that without welling up again. Good grief.


Now first of all I'd like to say that what I do, the Downs Side Up stuff, is not for any recognition or reward or payment. Basically I saw that the World was fearful of Down's Syndrome, so I began trying to change the World for my daughter and other families, so that they can have the best possible life. I also didn't want any other parents to feel as desperate as I did in the early days, purely out of ignorance and my own fear, so to them I offer tips, advice and hope.


Of course, the blog was how it all began. Downs Side Up is 16 months old now but the blog has long since become the hub of a large wheel of activity. I don't want to bore you, and even I find it hard to remember it all, so here's a list of some of the things I've done this year, in no particular order;


Well, you get the idea. It's been a head-spinningly busy, fly-by-the-seat-of-your-pants kind of year.


But to have that recognised is... well, I am very proud and it means that my efforts are having an effect.


Downs Side Up now takes up as much time as a full time job, mostly late into the night and when the children are at school. We live in Cornwall, so all that toing and froing to London is a bit of a pain, and we are often out of pocket. I sometimes have to turn things down because I can't fit it all in. We've even talked about moving to enable me to further my work.


I feel I have a duty to carry on, because I can.


And people seem to like listening and reading, so that's a bonus :)


The message is spreading that our children are a wonderful enhancement in life. So essentially all the late nights are worth it. So I'll carry on if you don't mind...


Thank you to everyone who nominated me for this award. I already feel like a winner and am in extraordinary company. I think all 10 finalists should all just have a group hug on the night. And thank you to everyone who has lifted me, inspired me and encouraged me. Those who have helped me through the scary moments when the trolls said unspeakable things about our precious daughter and I nearly gave up through fear. Those who helped spread the word, those who demanded I continue to shine a light into the darkest of shadows.


Thank you. Thank you all.